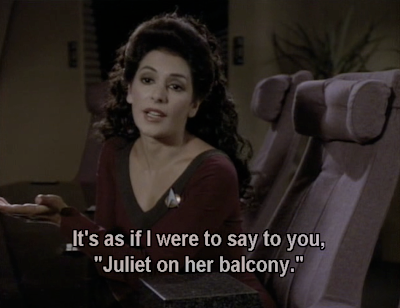 “Darmok.” By Joe Menosky and Phillip LaZebnik. Perf. Patrick Stewart, Jonathan Frakes, LeVar Burton, Michael Dorn, Gates McFadden, Brent Spiner, and Paul Winfield. Dir. Winrich Kolbe. Star Trek: The Next Generation. Season 5, episode 2. Syndicated television. 30 September 1991. DVD. Paramount, 2002.The Star Trek episode "Darmok" is much more often noted for its interest for linguists and linguistics than for anything Shakespearean. There's far more Gilgamesh, actually, than Shakespeare in it! However, there is an intriguing reference halfway through.

The premise of the episode is that communication with the aliens is impossible. The universal translator can translate some of the things they say ("when the walls fell," for example), but these sporadic phrases make little to no sense in the context. Eventually, the crew discovers that the Tamarians use a language that is almost entirely metaphoric (leaving Saussure, Derrida, and Lévi-Straus out of it for the moment). Here's their discussion of the problem:


Interesting, yes? But it's even more complicated than that. The image of Juliet on her balcony used as an example here does not have to be an image of romance. It could be an image of anticipation or loneliness or patriarchal oppression or imminent disaster! It could even be an advertising image for an architectural firm. In fact, it probably is!

The image in the play is similarly polysemic, presenting almost all these possibilities and more. The complexities of Shakespeare are only compounded by the complexities of language.
And yet, if I tell my beloved that she reminds me of Juliet on her balcony, the context implies one of these concepts to the ultimate exclusion of all others.  That's right: an advertising image for an architectural firm.

Can I help it if my beloved designs balconies for a living?*Links: A Gateway to Star Trek Information at Wikipedia.