The Dark Lady of the Star Trek Sonnets 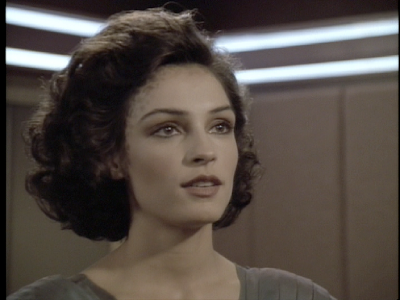 The plot seems a bit silly to me. The woman has the ability to detect what a man would want in a wife and to become that very thing. For Captain Picard, such a women would be strong, attractive, mysterious, knowledgeable about cosmic archeology, and (this is the part that seems less silly) something of a Shakespearean.

Alas, the Captain is unable to contemplate matrimony—particularly in this instance: the woman is pledged to marry another.

Take a look at the clip first; I'll return with some commentary after you've done so.


The conclusion—"I only hope he likes Shakespeare"—isn't a bad exit line.

We're given an allusion to "the dark woman of raven brows and mournful eyes of Shakespeare's Sonnets." The line almost alludes more to a millennia of critical work on the sonnets than to the sonnets themselves, but there are a few lines to which they may be pointing:

Sonnet 43 reads (in part) ". . . in dreams they look on thee, / And darkly bright are bright in dark directed" (3-4), but that sonnet is usually thought of as addressed to the young man instead of to the dark lady.

I suppose that the sonnet most at work in the twelve-word allusion above is 127. We have the raven-black brows, of course; we have, moreover, the eyes that "mourners seem" (10).

In the old age black was not counted fair,
Or if it were, it bore not beauty's name;
But now is black beauty's successive heir,
And beauty slander'd with a bastard shame:
For since each hand hath put on nature's power,
Fairing the foul with art's false borrow'd face,
Sweet beauty hath no name, no holy bower,
But is profaned, if not lives in disgrace.
Therefore my mistress' brows are raven black,
Her eyes so suited, and they mourners seem
At such who, not born fair, no beauty lack,
Slandering creation with a false esteem:
Yet so they mourn, becoming of their woe,
That every tongue says beauty should look so.

And there's one last issue: was it cheating to have Mr. Data (as she calls him) help her swot up her Shakespeare to show Captain Picard just how compatible they would be together? Is this the female singer's version of "Brush up your Shakespeare / And the women you will wow?"Links: A Gateway to Star Trek Information at Wikipedia.
Copyright 2008-2039 by kj at 5:58 AM