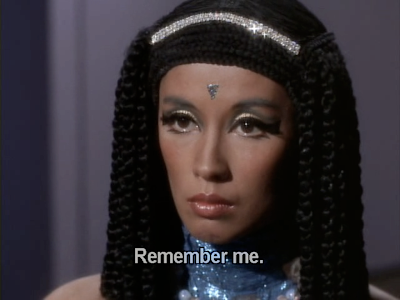 “Elaan of Troyius.” By John Meredyth Lucas. Perf. William Shatner, Leonard Nimoy, DeForest Kelley, Nichelle Nichols, James Doohan, George Takei, Walter Koenig, and France Nguyen Van-Nga. Dir. John Meredyth Lucas. Star Trek. Season 3, episode 13. NBC. 20 December 1968. DVD. Paramount, 2008.
Photo Caption:  France Nguyen, as Elaan of Troyius, quotes Hamlet, I.v.94 (part of Hamlet's father's ghost's speech to Hamlet).
The last time I wrote about "Elaan of Troyius" (for which, q.v.), I was following the conventional wisdom that says that the episode is a derivative version of The Taming of the Shrew.
And there are elements of Taming there. Elaan is a female character operating out of the normal bounds of her society, forced by a patriarchal system that she despises to marry when and whom they want her to marry. No wonder, margianlized as she is, that she starts throwing things at Captain Kirk! Who wouldn't? (Then again, many people have wanted to throw things at Captain Kirk, not all of them marginalized, oppressed female characters!)

But, beyond this character transplantation, there's not much in the way of plot borrowing from Taming.
However, the episode does quote from Hamlet (see the caption of the photo above) and (I'd like to make the case for this) does allude to Antony and Cleopatra.
First, the outfit, the behaviour, the treatment, and the attitude of Elaan herself is very similar to Cleopatra's (in Shakespeare's play). She also has astonishing control over men—in the episode, it's by use of tears with certain sci. fi. chemical properties; in the play, it's love.
One remarkable place where the two overlap is on the bridge of The Enterprise.  As you know, Cleopatra proves disastrously distracting to Antony during the Battle of Actium. Elaan proves similarly distracting to Captain Kirk when the Klingons are attacking: 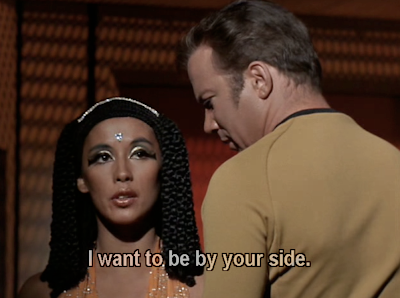 Elaan's declaration "I want to be by your side" is met with a curt "Your presence here is interfering with my efficiency" from Captain Curt—I mean "Kirk." They leave the bridge at that point.
Later, Kirk breaks into Antony's soliloquy "I have fled myself; and have instructed cowards / To run and show their shoulders" (III.xi.8-9).
No, he doesn't, really. But he might as well have!

Perhaps the connection could be more firmly substantiated between this episode and "The Perfect Mate" episode from Star Trek: The Next Generation. But at least the Hamlet quote is unequivocally from Shakespeare. After all, where else would you find the phrase "Remember me"?Links: A Gateway to Star Trek Information at Wikipedia.
Copyright 2008-2039 by kj at 6:06 AM