One more Shakespeare Quote from a Q Episode 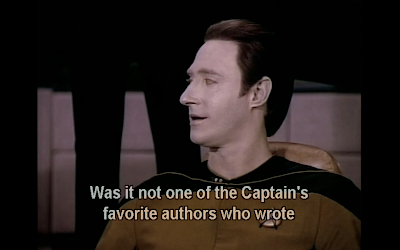 “Hide & Q.” By C. J. Holland and Gene Roddenberry. Perf. Patrick Stewart, Jonathan Frakes, LeVar Burton, Michael Dorn, Denise Crosby, Gates McFadden, Marina Sirtis, Brent Spiner, Wil Wheaton, and John de Lancie. Dir. Cliff Bole. Star Trek: The Next Generation. Season 1, episode 10. Syndicated television. 23 November 1987. DVD. Paramount, 2002.They always seem to quote from Shakespeare when Q shows up. I'm not entirely sure why, but I think it may have to do with the idea that Q seeks to understand human nature—and who has more to say about the emotions and actions of human beings than Shakespeare?
At the end of "Hide and Q," an episode in which Picard and Q exchange Shakespeare quotes (for which, q.v.), Data gives us a brief quote from Polonius as a way of indicating why the crew wants to be who they are: 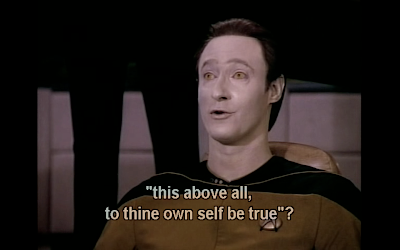 Hi, I really love your blog. I am working on a project for an ungraduate Hamlet class about Star Trek and Hamlet, and your blog has been very helpful. Is there a way that I could access the YouTube videos you include so that I can embed them for my project?

Thanks very much, Unknown! The videos here aren't through YouTube--in part because of Bardfilm's Fair Use Policy, available at this URL:

It is likely to go beyond copyright law to pass video files around--but you can always link to this URL!