A Disney Dagger in Polanski 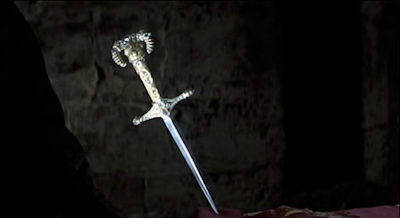 Macbeth. Dir. Roman Polanski. Perf. Jon Finch and Francesca Annis. 1971. Sony, 2002.
Polanski's version makes a number of interesting choices. First, the dagger is visible to the audience. That seems like a small thing, but it has large ramifications. On stage, it would be difficult to have a visible dagger—the kind of choice that stage productions have to make is manifested in their decisions about whether to portray the ghost of Banquo or not. On screen, showing the dagger becomes a viable option—and Polanski seizes upon it.

Showing the dagger can either enable us to enter into Macbeth's psyche (we see what he sees) or invite us to imagine that the witches have heightened power (they are behind the hallucination—they direct Macbeth's actions). The first seems, on the face of it, to be better supported by the text; however, the second is a viable option if we realize that Macbeth's definition of the vision as "A dagger of the mind" (II.i.38) may be merely an interpretation of what he sees rather than a certain description of what he sees.

The rest of Polanski's Macbeth tends to give the weird sisters greater power—greater control over both Macbeth and the larger events of the play. I think that the choice of showing the dagger is part of this tendency.

None of that explains why the dagger looks so ridiculous! I mean—it's shiny and pointy, and it has sparkles all over it! What on earth? It's a Disney version of a Dagger!

Two other interesting decisions are revealed in this clip. Polanski's decision about which parts of Macbeth's speech are in voiceover is one of them. Anyone (besides the audience) observing Macbeth during these three minutes would have heard him say this (and only this):


Come let me clutch thee.
I have thee not, and yet I see thee still.
My eyes are made the fools o' the other senses
Or else worth all the rest . . .
There's no such thing.
It is the bloody business which informs
Thus to my eyes.

All the rest (not that we get the rest of the speech in its entirety) is in voiceover. But the fact that not all of the speech is in voiceover blurs the distinction between Macbeth's point of view and what is actually happening. The effect is to point to the dagger again—to make us wonder how real it is, both to Macbeth and to us!

The final thing Polanski does (and it, too, is much easier to do in a film than on stage) is crosscutting to Lady Macbeth's ringing of the bell. It's a reminder that this is a conspiracy, and it brings Lady Macbeth back into Macbeth's thoughts and ours at this key moment. The bell itself might do it—we know that she is supposed to ring a bell when Macbeth's drink is ready (cf. II.i.33)—but it makes her a concrete part of the action.