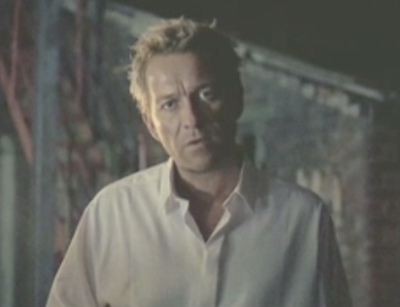 Macbeth. Dir. Michael Bogdanov. Perf. Sean Pertwee and Greta Scacchi. 1998. DVD. Home Vision Entertainment, 1998.
Originally broadcast in the UK, Bogdanov's Macbeth is a straightforward performance. The only particularly exciting thing about it is that it's placed in a modernized setting. Yet it's not without its interest. In the dagger speech, Sean Pertwee gives us a suffiiently awed Macbeth, and Bogdanov's decisions about voiceovers are intriguing:

There are other points of interest in the film, including Bogdanov's use of the witches and his use of special effects (especially as they relate to the witches). The witches are homeless women who have the ability to scatter themselves to the wind in the traditional Saturday-morning-movie fashion. But we'll have to save that for another time.
Links: The Film at IMDB.