Book Note: Shakespeare had a Daughter 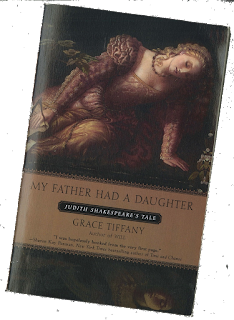 Tiffany, Grace. Shakespeare had a Daughter. New York: Berkley, 2003.
I wanted to enjoy this novel; I thought I would enjoy this novel. I had liked Grace Tiffany's Will, after all (for which, q.v.), and she herself is very personable. But I'm afraid I didn't enjoy this novel.

The main reason is, I think, that it lacks fire and passion. The story is told in a route, emotionless way.

The story centers on Judith Shakespeare, Shakespeare's younger daughter (Hamnet's twin). Responsible for Hamnet's death by drowning, Judith disguises herself as a boy and runs away to London, desiring above all to take a place on the stage.

She arrives in London (with the usual obligatory paragraphs about the terrible smells and the heads of traitors on London Bridge), finagles her way into the company, gets a small part, meets Nathan Field (who discovers she is a girl and asks to sleep with her as the price for keeping her secret—to this our heroine emotionlessly and without much commentary succumbs), deprives Nathan of his role as Viola in Twelfth Night, takes over the role herself, and is recognized by her father. Later and older, she returns to London, has an affair with Nathan Field, returns to Stratford, and marries Thomas Quiney.

The two main issues with which Judith Shakespeare deals—the loss of virginity and the guilt over the death of Hamnet—are the main themes—they're addressed periodically throughout the text—but they don't become compelling and Judith doesn't deal with them satisfactorily.

All in all, the book tends toward the dull. Lacking the interesting use of language Tiffany has in Will, it's a book to plod through rather than to enjoy.