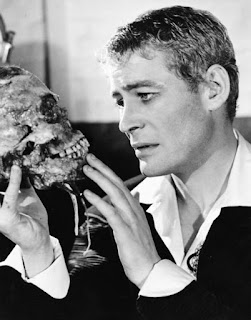 “Of Made We're Stuff the Love You'll.” Perf. Peter O'Toole. Pizza Hut. 1995. Advertisement.
As part of an occasional interest in the uses advertisers have put Shakespeare—see, for example, this trio of ads, this pair of powerful and weak ads, this use of the St. Crispin's Day speech, and this imaginary Pepsodent ad—I was delighted to be presented with this pizza commercial.

The ad campaign from which it comes is moderately clever. To promote its "stuffed crust" pizzas, the company was in the middle of encouraging its customers to eat their slices of pizza in a non-traditional manner—crust first. Hence, I gather, they reversed their slogan "You'll Love the Stuff We're Made Of" for the campaign.

But it's the use of Shakespeare and of Peter O'Toole that makes this quite brilliant. O'Toole had famously played Hamlet in a 1963 production of the play directed by Lawrence Olivier. In this commercial, he is instructed, during what looks like an audition, to "Try it backward." Utterly unflummoxed (and perhaps used to condescending to directors whose instructions don't make that much sense), he delivers the most convincing backward soliloquy I've ever heard: