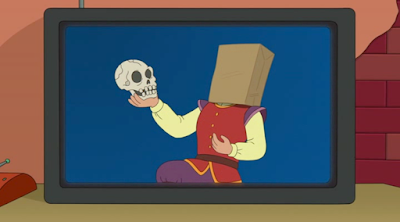 One episode of the television show Futurama attempt to answer an age-old question. "Who is the better actor?: A robot soap opera star named Calculon or a film actor named Langdon Cobb who has never been seen without a bag over his head.

I won't trouble you with the details of how they determine upon a competition (the details of Futurama episodes often cause dizziness), but I will mention that Calculon, in an effort to ensure that his death scene is believable, determines to take actual poison (or the robot equivalent) at the end of his chosen scene—Romeo's death scene.

Here's the speech as Calculon delivers it:

And here's the clip of that scene:

Calculon, who is generally known for hamming it up, actually delivers the lines with a surprising sensitivity. The humor lies not in goofing up Shakespeare but in performing his lines well and in finding his lines to be so deeply moving.

For some reason, the segment reminds me of Orson Wells' delivery of the same speech during his appearance on I Love Lucy (for which, q.v.).
Links: The Episode at IMDB.