Book Note: The Slaying of the Shrew 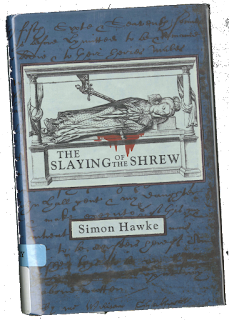 Like the previous book, this one centers on the adventures of Symington Smythe and Will Shakespeare. Here, the former is a man who wants to act—but forgets his lines, however short and simply they may be, most of the time. The later is an actor, but he's pursuing the writing of plays more and more. Like the previous book, events in the lives of the characters mirror, foreshadow, and mimmic events in a Shakespeare play—but not only the one you're expecting from the title!

If I say too much more, the spoilers will detract from your own reading of the book. It's a mystery with Shakespeare as one of the characters—but not the main one—and his surroundings as the setting.

The category might be "Shakespeare Beach Novel"—a light, not-too-serious read that's entertaining and enjoyable . . . though it may not be terribly deep or remarkably memorable.