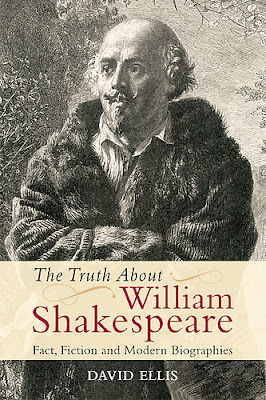 Ellis is meticulous in analyzing the anecdotes and assumptions that have made their way into every aspect of biographies of the bard in chapters that take us chronologically through Shakespeare's life. His chapter "How to make bricks without straw" comments on the ways biographies of Shakespeare—if they are to be written at all—must depend largely on speculation. Subsequent chapters then detail the speculation in different categories:  "Forebears," "The female line and Catholicism," "Boyhood and youth," "Marriage," "The theatre," et cetera.

Let me give you an example of Ellis' modus operandi. First quoting from Katherine Duncan-Jones, who says, "as a member of Leicester's Men for some time between 1584 and 1586, Shakespeare would have quickly shown his versatility both in writing and performing. He would have been a natural choice to supply one of the gaps left by Knell's death in June 1587" (61, Ellis' emphasis), Ellis goes on to critique the disappearance of the conditional.


What is so effective here is again that "would have" has the mere appearance of the conditional; bu that is more interesting from the point of view of biographical method is how, when Duncan-Jones later reverts to the question of Shakespeare and the Queen's Men, any hint of that conditional (previously event in all the words I have italicised) has disappeared. Only a little later, for example, she speculates about the work Shakespeare would have done for the Queen's Men "while he was a full-time member of the company in the later 1580s." Her treatment of the issue is only one example among hundreds, in her work and those of the other biographers, of how what might have been is gradually converted into what was. (60)

Ellis primarily considers Duncan-Jones' Ungentle Shakespeare, Stephen Greenblatt's Will in the World, Peter Ackroyd's Shakespeare: The Biography, Jonathan Bate's The Genius of Shakespeare and Soul of the Age, René Weis' Shakespeare Revealed, and James Shapiro's 1599, but he comments on dozens of others.

The book is great, offering a welcome bit of common sense and a much-needed reminder to exercise sound scholarship when making claims about the life of the Bard.
Click below to purchase the book from amazon.com
(and to support Bardfilm as you do so).