An Odd Approach to Romeo and Juliet in Orange County 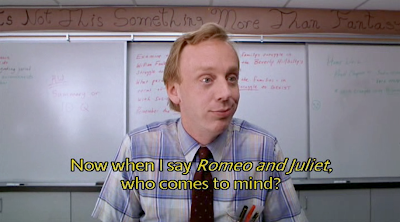 Orange County. Dir. Jake Kasdan. Perf. Colin Hanks, Jack Black, Schuyler Fisk, John Lithgow, Lily Tomlin, George Murdock, Mike White, Chevy Chase, Kevin Kline, and Ben Stiller. 2002. DVD. Warner Bros., 2009.
Orange County is an odd little film about a surfer who finds a book in the sand one day—one written by a professor of creative writing (I infer) at Stanford University. It turns his life around, and he desires nothing more than to become a writer. For him, that involves getting into Stanford.

The one scene that's directly related to Shakespeare takes place in his classroom. A quote above the white board there reads "Is not this something more than fantasy?" I imagine the quote is meant to inspire enthusiasm in the subject matter, but the fact that it's Bernardo's line to the skeptical Horatio taken completely out of context pleases me greatly.

The scene ends up being something of a parody of teachers who use film versions of Shakespeare plays to teach Shakespeare—but that's all right. I can take it. Observe:


“Some great movies are based on his plays: Hamlet, West Side Story, Talented Mr. Ripley, Waterworld, Gladiator, Chocolat . . ."

Well, maybe I can't take it, but I can see how some people might find that amusing.

The rest of the film is devoted to zany antics geared toward getting our protagonist into Stanford (his guidance counsellor sent in the wrong transcript, so he was declined). Finally, he meets the writer who wrote the book he found in the sand . . . and it turns out to be Kevin Kline. I can't help but see that as an allusion to his role as teacher in The Emperor's Club (for which, q.v.).
Links: The Film at IMDB.