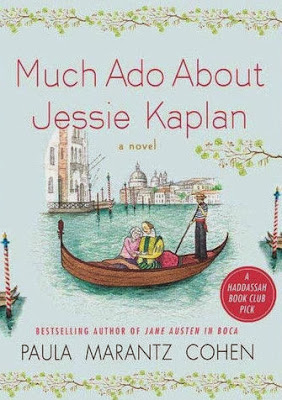 Cohen, Paula Marantz. Much Ado About Jessie Kaplan. New York: St. Martin's Griffin, 2005.
I finished reading this light and delightful little novel backstage at the production of Midsummer Night's Dream that I was recently in. There's not as much Shakespeare qua Shakespeare as I'd like, but the characters are very appealing and very funny, and the plot is quite compelling.

While the family fusses over the preparation for the elder child's bat mitzvah, a new problem arises.  The grandmother starts quoting odd snatches of old poetry and singing Elizabethan songs. At first, this goes relatively unremarked upon, but it increases and starts to become problematic.

The grandmother (the eponymous Jessie Kaplan) has become convinced that she is the reincarnation of the Dark Lady of Shakespeare's sonnets. She believes that she was a Jew living in Venice when Shakespeare visited the city. They fell in love, and he wrote her many sonnets—not only the mean ones recorded in the published sonnets, but many happy ones as well. Somehow, they fell out of love, and, in revenge he wrote not only the mean sonnets but also modeled the character of Jessica and Shylock in The Merchant of Venice after her and her father. She never forgave him.

Eventually, Jessie interests the daughter's high school English teacher in her story—particularly when she says she remembers where she hid those extra sonnets.

I'll stop there to avoid spoilers. But do read the book. It's pretty light, but it does have some good things to say about interpretation and about Shakespeare.

Much Ado About Jessie Kaplan