Tennant's Hamlet to be Released on DVD 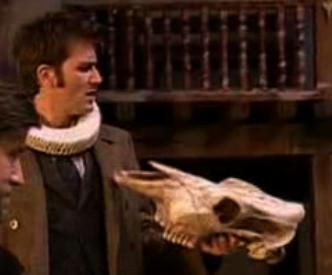 Hamlet. Dir. Gregory Doran. Perf. David Tennant and Patrick Stewart. Royal Shakespeare Company. Stratford-on-Avon. The Courtyard Theatre. 24 July-15 November 2008.I've had this e-mail in my inbox for a while, and I have five quick minutes to post it here.

This summer, David Tennant, the current (for now only, alas) Doctor Who played Hamlet in Stratford. The world—the universe, in fact—went wild. He's very good at playing people who have a heaviness of existence that belies their young looks and who are intent on putting the time, which is often out-of-joint, right again.

Those in charge of decision-making have done the right thing (whether it was due to the multiple petitions, the desire to preserve the performance, or simple economics): Tennant's Hamlet will be released on DVD. Hurrah!

Note: The image above is Tennant—The Doctor, really—striking a brief Hamletesque pose with a very odd skull that he found in the tiring house of the Globe theatre when he travelled back to 1599 to save the world with William Shakespeare and Martha Jones (the episode listed below).
“The Shakespeare Code.” By Gareth Roberts. Perf. David Tennant, Freema Agyeman, and Dean Lennox Kelly. Dir. Charles Palmer. Doctor Who. Season 3, episode 2 (New Series). BBC Wales. 7 April 2007. DVD. BBC Warner, 2007.
Copyright 2008-2039 by kj at 6:56 AM