Shakespeare Sits for a Portrait in 1610 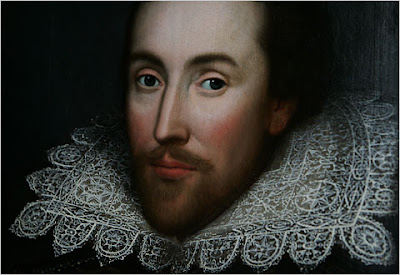 Thanks for the link to The Lede, which links to other links on Shakespeare portraiture, so that one gets a pretty good idea of the significance of this find and Prof. Wells comment that whereas the others are dull and lifeless this one is anything but. It's Shakespeare alive at forty-five! Why he even looks like he could be the author of all those plays and sonnets that bear his name.

Hmm. Someone pointed out that the article says W.S. was 46 when the portrait was painted in 1610, thus putting a stake through the heart of my little rhyme. But W.S would be 46 only if ithe portrait was painted after his birthday on April 23. I've got a window of 3 months and 23 days in which it could be "Shakespeare alive at forty-five!" I favor a winter sitting until someone proves otherwise.