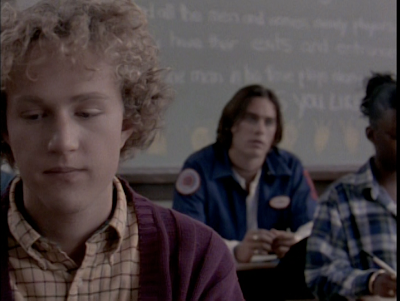 “Self-Esteem.” By Winnie Holzman. Perf. Bess Armstrong, Wilson Cruz, and Claire Danes. Dir. Michael Engler. My So-Called Life. Season 1, episode 12. ABC. 17 November 1994. DVD. Bmg Special Product, 2002.
In considering the way in which a Shakespeare sonnet is brought in to emphasize and contemplate themes in an already-Shakespearean plot in the Shakespeare Retold's Much Ado About Nothing reminded me of similar uses of sonnets in other settings.

One episode of My So-Called Life brings Sonnet 130 ("My mistress' eyes are nothing like the sun") to bear on its plot structures in this way. I don't pretend to know the intricacies of the Jordan / Brian / Angela love triangle. But it it clear in the clip that the two men realize and recognize something about the woman that they have been idealizing. And the teacher realizes that class discussion has gone rather well today, thank you very much!


As a bonus, here is the sonnet in question and the dialogue that follows its reading:

My mistress' eyes are nothing like the sun;
Coral is far more red than her lips' red;
If snow be white, why then her breasts are dun;
If hairs be wires, black wires grow on her head.
I have seen roses damask'd, red and white,
But no such roses see I in her cheeks;
And in some perfumes is there more delight
Than in the breath that from my mistress reeks.
I love to hear her speak, yet well I know
That music hath a far more pleasing sound;
I grant I never saw a goddess go;
My mistress, when she walks, treads on the ground:
And yet, by heaven, I think my love as rare
As any she belied with false compare.


Mr. Katimski: What kind of girl is Shakespeare describing here? Is . . is she the most beautiful girl?

Mr. Katimski: Is she a goddess? Mmm? Physically perfect? The kind of girl who stops traffic when she walks down the street?

Brian [with a slight chuckle]: No.

Mr. Katimski: So he's not in love with her?

Jordan [barely audible]: Yeah. [Then louder:] He is.


Links: The Episode at IMDB.