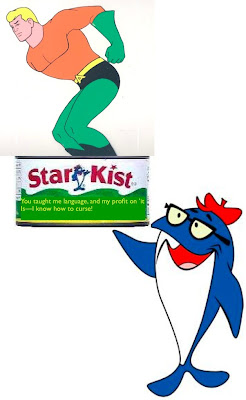 The Tempest. Dir. George Schaefer. Perf. Maurice Evans, Richard Burton, Roddy McDowall, Tom Poston, Liam Redmond, and Lee Remick. 1960. Videocassette. Films for the Humanities, 1983.
I have been studying The Tempest this semester; this led to my discovery of Richard Burton as Caliban in a 1960 made-for-TV (Hallmark Hall of Fame) production of the play. It certainly isn't great, but it isn't always terrible, either.

Burton's Caliban looks like a cross between Aquaman after a late evening and Charlie the Tuna (mascot of the Chicken-of-the-Sea brand of canned tuna fish—Starkist) after meeting up with some rough, angry dolphins.

But the voice—that amazing voice. That's surely something!