Henry V. Dir. Kenneth Branagh. Perf. Kenneth Branagh, Emma Thompson, and Judi Dench. 1989. DVD. MGM, 2000.
Of the many astonishing moments in Branagh’s Henry V, this one is striking, particularly as it serves as an example of the way implicit meaning works in a film.

The moment is about two-thirds of the way through the post-battle Non Nobis scene (cf. the clip below). A following shot takes us, with Henry, through the battlefield. As the Non Nobis swells, we see various and sundry effects of the battle—the dead Nym, the dead York, the living Dauphin, and good old Montjoy.

But, while he approaches Montjoy, a group of women approach him from a distant plane. They’re shouting (but no one can hear anything over the swelling strings and, at that point, French horns (Ha! French horns right there!) of the Non Nobis). Monjoy intercepts them, and Henry makes his weary way up the battlefield.

As we view this scene, we must find our own meaning in it—we’re not told the significance of these women running at Henry as he carries the dead boy. It has implicit meaning.

Looking at the screenplay, the implicit meaning becomes more explicit (the written word confirming or dissolving the significance we had placed on our visual encounter with the scene):


As he passe[s] MONTJOY, French women rush toward him screaming. They recognise him as the man to blame. MONTJOY holds them back as HENRY passes and finally moves onto a cart where the bodies of the dead boys are being piled.

Now we are assured that the women are French, that they recognise (in the spelling of the British Isles) Henry, and that they blame Henry.

Sometimes, confirming our interpretations of implicit meaning isn’t as easy. Where’s the screenplay for the Shakespeare Retold version of Much Ado About Nothing? 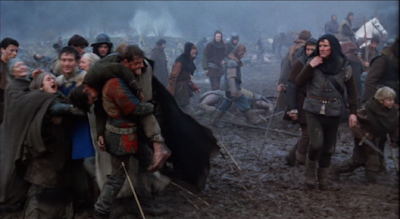 Montjoy holds off the French women who blame Henry.
Links: The Film at IMDB.