There’s a 1986 Moonlighting episode in which a kid (we mostly see his sneakers) who is about to watch Moonlighting (some nice framing / layering / metatheatrical stuff happening there!) is interrupted by his mother (we never see her face, either) and told to get to work on his Shakespeare homework.

It turns out that he has to read The Taming of the Shrew, and, thanks to the magic of television and the power of the imagination, the characters in Moonlighting perform the play in his mind for him!

Although I considered showing the episode, it struck me that it only really makes sense to people who are Moonlighting devotees. If you don’t understand the relationship between David Addison Jr. and Madelyn “Maddie” Hayes (the characters played by Bruce Willis and Cybill Shepherd), you won’t get the jokes—the biggest of which is the layering through Bruce to David to Petruchio and Cybill to Maddie to Kate.

Since I’m not a MD (Moonlighting Devotee) myself, I thought it pretty tedious.

As a Doctor Who fan (DWF), on the other hand, I thought the episode entitled “The Shakespeare Code” was irresistibly clever. 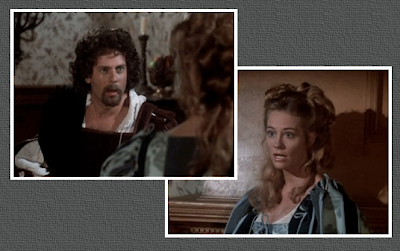