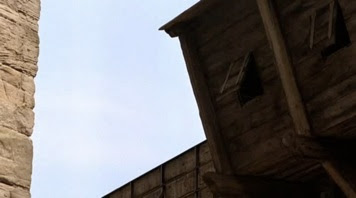 . . . now you don’t.
And that’s one of my favorite things about the Zeffirelli / Mel Gibson Hamlet (the character, not the play). This Hamlet is sneaky.

There are great advantages to portraying a Hamlet who overhears a lot of what goes on in Elsinore. It helps motivate his hatred of Polonius, it helps us understand his suspicions of Ophelia, and it gives him a greater rationale for putting on the mad act.

Of course, that depends on whether we think that Mad Max is capable of merely acting mad and not being mad.
Copyright 2008-2039 by kj at 9:15 PM