With an extra 111 minutes at its disposal, what did the Zeffirelli Taming of the Shrew accomplish that the 1908 D. W. Griffith film did not? With only fifty-two extra minutes, what did the Sam Taylor Taming manage to do above and beyond Griffith?

I'd love to see the Griffith film, but, alas, no one has YouTubed it yet (nor can I find it through more orthodox means). There are a few small clips (from which these images come) on the DVD with the 1912 Richard III with Frederick Warde (Richard III. Dir. James Keane. Perf. Frederick Warde, Robert Gomp, Albert Gardner, and Violet Stuart. 1912. DVD. Kino, 2001), but not much to sink your teeth into. The clips come in a documentary section that focuses on the rediscovery of the Ward film.

The narration tells us that, "When adapting The Taming of the Shrew, Griffith avoided Shakespeare's dialouge and reduced the play to ribald comedy at its most primitive. How else was one to compact a five-act play into an eleven-minute film without benefit of sound?"

That's a fair quesiton. But another fair question is how, with the benefit of sound and plenty of time, a director can justify spending so much time on slapstick comedy without much sophistication—as both the Sam Taylor and the Zeffirelli versions do?

If we cut the slapstick, how much narrower is the margin between the eleven-minute Taming and the other two? 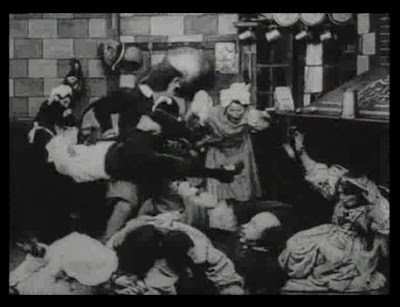