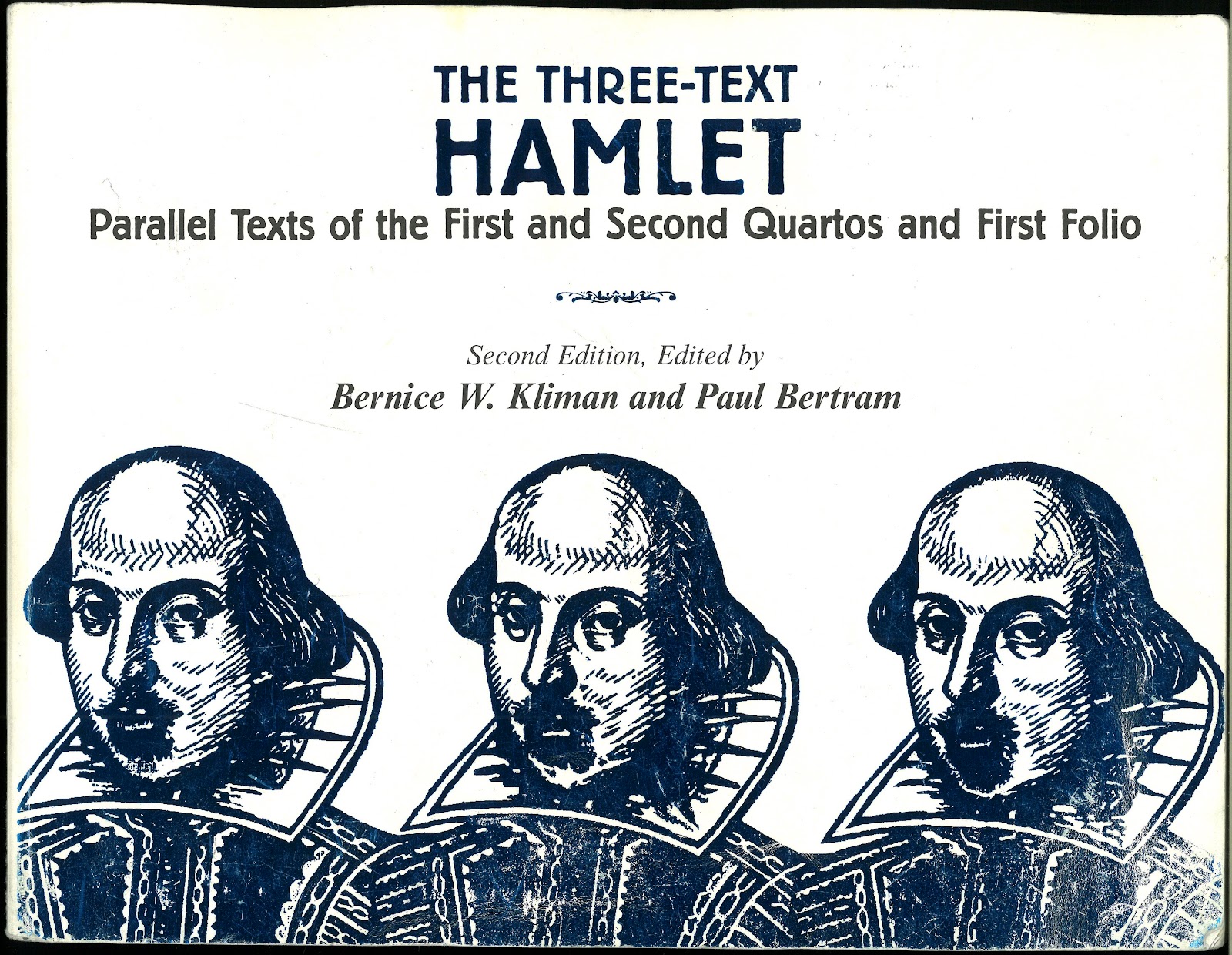 Shakespeare, William. The Three-Text Hamlet: Parallel Texts of the First and Second Quartos and First Folio. Ed. Bernice W. Kliman and Paul Bertram. 2nd edition. New York: AMS Press, 2003. I'm pleased to have tracked down a copy of this amazing (but unexpectedly rare) resource.
It's just what the title says it is—a presentation of the three key early printings of Hamlet side-by-side. At a glance, we can see where the first quarto (abbreviated Q1), the second quarto (not unexpectedly abbreviated Q2) and the first folio (F) differ and where they mirror each other.
The volume also contains a fourth column dedicated to places where the order of Q1 differs from the other two printings. I'll come back to that in a moment, but let me first show you how it works with an example from Act I, scene ii.
There's been a fascinating discussion on The Shakespeare Conference Message Board about why Edgar is not specifically listed as present in Act I, scene ii of King Lear. You can find part of that conversation here and read backwards from the (the archives are difficult to navigate, but you can find more if you're determined).
And, as my grandmother used to say, "I told you that to tell you this."
I wondered whether Ophelia was specifically listed as entering in Act I, scene ii of Hamlet. She's present in many of the productions—both film and stage—that I've seen, but that could just be tradition.
The quickest way to find out was to grab my copy of The Three-Text Hamlet to see. And here's what I found:

We can see, then, that Ophelia is only specifically listed as entered in F. Prior to 1623, I suppose she was just hanging out in her closet.
In the example above, the fourth column is entirely blank. Let me just show you an example of a place where it's filled in. It also happens to be the most famous speech in Shakespeare. Q1 doesn't always follow the order of the plot points of Q2 and F. [Note: Sticklers can rightly point out that it's really Q2 and F that don't follow the order of Q1's plot points, but the history of production has given preferential treatment to the order found in Q2 and F. But thanks for that point, sticklers!] Here, then, we can easily compare Q1's version of the speech to Q2's and F's (the entire nunnery scene takes place much earlier in Q1—before the fishmonger scene, even): 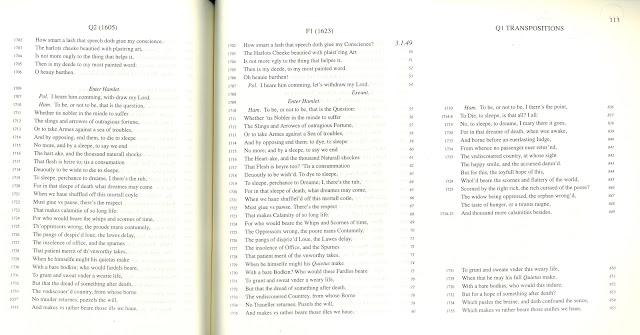 As something of a side note, the Folger Shakespeare Library has an 1883 four-text version of part of Hamlet available in their LUNA (the Folger Digital Image Collection). It includes Q1, Q2, F, and a conflated text, but it only goes through part of Act I, scene iii. I wonder if it was a speculative publication designed to gather support for a fuller future project, but I don't know enough to know that for certain.  In any case, you'll find a quick sample below, and you can see more here.

Again, I'm just so pleased to have tracked this down. It has already been and will continue to be a mainstay of my study and teaching of Hamlet.
Click below to purchase the book from amazon.com—
if you're lucky enough to find an available copy for sale
(and to support Bardfilm as you do so).

You know, my birthday is coming up!

Sounds like a fascinating reference book. These days we have so many online resources to go to for this stuff, it must be a whole different experience to have it right there on your shelf.

Well, I just noticed that there's one paperback copy available for $51. If it's in good shape, that's a good price.

My birthday gift to you is alerting you to its existence! Happy birthday!