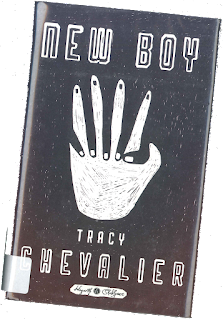 Chevalier, Tracy. New Boy. London: Hogarth Shakespeare, 2017.
Hang on tight, everyone, this may take a while. This will be a roundabout way of talking about Tracy Chevalier's New Boy, but it's one way of getting my point across.

I trust you're following me so far. We have an amazing performer who is known for an incredible singing voice.

Have you heard her sing "Ghost in this House"?

Let's all take a quick listen:

Listen to that astonishing voice. It has an unbelievable clarity to it. Listen to the "up" and the "down" in the lines "I don't keep this place up; / I just keep the lights down." You can slice that note anywhere you want and you'll get exactly the same segment—it's beyond comprehension. It's like a giant salami of sound, cured to perfection.

But what she's singing is little more than drivel. The melody is great; the voice is superb. But the lyrics leave an enormous amount to be desired. I listen to the song entirely because of the voice.

Note: For a better marriage of voice, melody, and lyrics, listen to Alison Krauss sing the Beatles' "I will."

Another Note: I have the same complaint—as seemingly-unthinkable as it might be—about Adele. She needs to cover more Dylan, sing more gospel numbers, or do the Cole Porter Songbook. Put that voice to better use, Adele, than singing codswallop like "Rumor Has It."

I told you that to tell you this.

Tracy Chevalier's New Boy is very well-written, has an excellent concept involving race, and presents a number of intriguing voices.

But it just doesn't work.

The primary reason for that is its setting. The plot of Othello is played out in the grade-school classroom. That's a place for jealousies and rivalries, of course, but the idea of Dee "going with" Casper behind Osei's back lacks gravitas, to put it mildly. I suppose a handkerchief is a light enough object, so the idea of a strawberry pencil case replacing it isn't too far off. But the rest of the plot does not work in the setting, however well-written it might be.

Here are a few sample pages, starting with Dee's first lie to Osei. 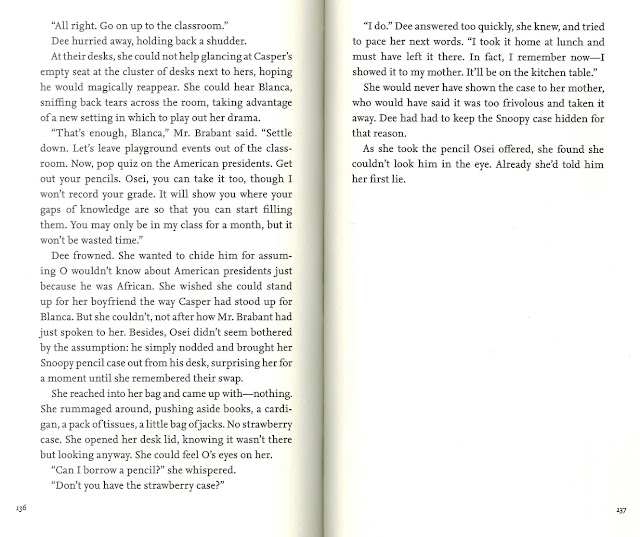 Ian (our Iago analogue) tempts Osei in this section: 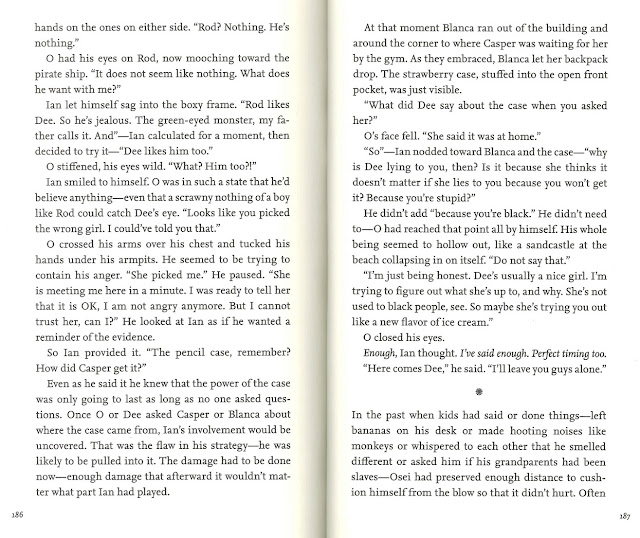 Finally, Osei lashes out at Dee: 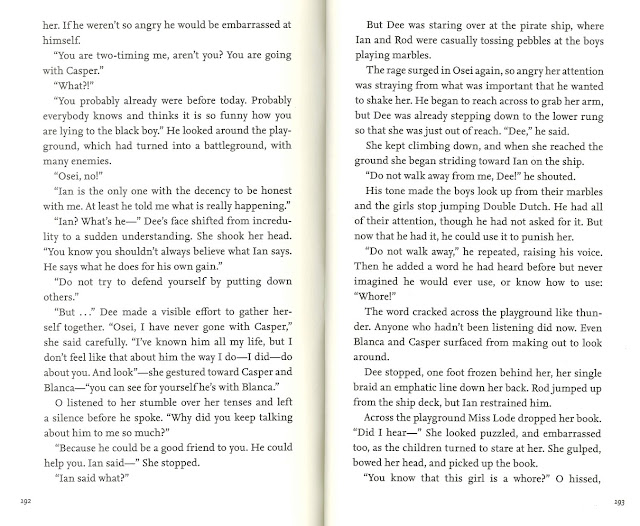 Again, the book is well-written and interesting, but, all in all, it doesn't succeed.
Click below to purchase the book from amazon.com
(and to support Bardfilm as you do so).

Bonus: Alison Krauss singing "I Will":