Have I been Duped into Watching the 1990 film Ghost as a Hamlet Derivative? 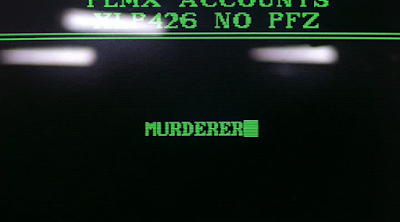 But I put it on a list of films to get to, and I've recently managed to get to it.

And I'm not convinced.

Shakespeare Geek and I often argue about whether The Lion King counts as a Hamlet derivative or not. My basic answer falls back on the intentional fallacy. Whether the creators intended it to be related to Hamlet or not, it's evident that it's related to Hamlet (though the ways in which it's related are complicated and interesting).

I'm not entirely sure I can make that argument about Ghost. So many things just don't fit.

So, yes, there will be spoilers ahead. But Ghost was one of the most popular films of 1990, so if you don't know the basic plot by now, you might just want to read on to learn it.

Sam (the Patrick Swayze character) and Molly (played by Demi Moore) are sweet on each other and hope to get married. They work together on some pottery in the film's most iconic scene. Same has found some strange incongruencies in the accounts at work. Carl finds out—and the's the guilty, embezzling party. So he hires someone to kill Sam. Sam stays around as a ghost, and figures out Carl's guilt. Carl starts to make the moves on a grief-stricken Molly. Using Oda Mae Brown (played by Whoopi Goldberg), a fake psychic who turns into a real psychic when she hears Sam's voice, Sam figures out a way to get revenge on Carl and to express his love for Molly.

To fit this in to the Hamlet narrative, we need to imagine that Sam is Hamlet and Hamlet, Sr., that Molly is Gertrude and Ophelia, and that Carl is Claudius.  And I suppose Oda Mae is Horatio or the ghost. There's something there, but it's not absolutely clear.

Here's one scene that resonates, even though there's no direct correspondence with Hamlet:

I think Hamlet, Sr. would have gotten a big kick out of being able to do something like that.

The only direct connection to Shakespeare is actually a reference to Macbeth—not actually to any plot element or any line, but to a production of Macbeth that Molly and Sam go to see:

Yes, Sam isn't particularly impressed by the production. Of course, that's before he became a ghost—perhaps his perspective on Shakespeare changes when he makes that change.

What are your thoughts? Have you been told this is a Hamlet derivative?  Does that make sense to you, or is it confusing to you like it is to me?
Links: The Film at IMDB.