Shakespeare in Sabrina, the Teenage Witch 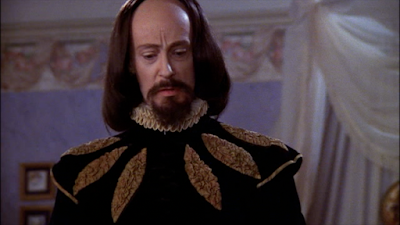 "Jealousy." By Jonathan Schmock, Nell Scovell, and Frank Conniff. Perf. Melissa Joan Hart, Caroline Rhea, and Beth Broderick. Dir. Jeff Melman. Sabrina, the Teenage Witch. Season 4, episode 3. ABC. 8 October 1999. DVD. Paramount, 2016.
When I say "Shakespeare in" (as in the title of this post), in this case, I mean the person of Shakespeare rather than quotations from Shakespeare.

I know next to nothing about this show. It's one that passed me by. I think I was writing my dissertation through the entire multi-season run of the show.

But, as I've said before, I'll try almost anything if there's a Shakespeare payout somewhere in the process. This one, though, did test my limits.

The main character—Sabrina, I assume—becomes jealous of another student's writing. In order to confirm her opinion that it's bad (even though it's actually quite good), she summons three great literary figures from the past to ask their opinions of the work. I'm including that clip below—as well as a bit from later in the show where the expression "the green-eyed monster" (from Othello) makes itself manifest.

There you go! The most exciting minute and fourteen seconds in all of Sabrina, the Teenage Witch. Once again, be grateful to your friendly neighborhood Shakespeare blogger for taking that on.
Links: The Episode at IMDB.