Pericles at the Guthrie 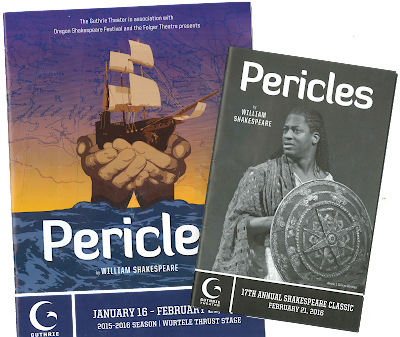 Pericles. Dir. Joseph Haj. Perf. Barzin Akhavan, Wayne T. Carr, Jeffrey Blair Cornell, Darcy Danielson, Armando Durán, Michael Gabriel Goodfriend, Jennie Greenberry, Michael J. Hume, Cedric Lamar, Brooke Parks, Zlato Rizziolli, Emily Serdahl, U. Jonathan Toppo, and Samuel L. Wick. Guthrie Theatre Company. Minneapolis. 16 January—21 February 2016.
I saw Joseph Haj's production of Pericles on 21 February 2016–the very last day of its run. Had I seen it on the first day, I would have reviewed it much more promptly, but any pressure to let the potential audience know about it was dissipated by the fact that there were no more shows to see.

Still, I'd like to put my two cents in. Ideally, we'll have many more Haj productions at the Guthrie—so I'd like some brief record of the first.

Pericles is an underrated play, but it's still not tremendous. As the old limerick goes,


Shakespeare, the writer of plays,
Had his better and his worse days.
On the best, the best yet:
He composed his Hamlet.
On his worst, he wrote Pericles

That's not entirely fair, but Pericles, despite having remarkable speeches and lines—like this one, for example . . .

I was skeptical about how the Guthrie would handle such a mixed bag of pirates, incest, houses of ill repute, riddles, journeys, shipwrecks, and complicated political situations.

Haj allayed my suspicions. His production—a version closely modeled on one he did at the Oregon Shakespeare Festival the previous summer—was genuinely fun, with sweeping and imaginative visual and auditory effects. The most memorable and amazing of them all was Pericles in the shipwreck. A gigantic flowing piece of blue material covered the entire stage, billowing and blowing as Pericles tossed his way through it. There were also projects planets, stars, and maps the were used marvelously well to create a sense of almost infinite scope. Also interesting was the way the opening riddle was presented: Antiochus' daughter had the riddle tattooed on her back. The acting was quite good as well, giving us a sense of King Lear, The Tempest, The Comedy of Errors, Othello, and other plays.

In short, the production was extremely impressive visually—even though the play as a whole didn't have great organic unity. I look forward to seeing what Haj will give us this season—and in all the seasons to come. If he can do this with Pericles, imagine what he will be able to do with, say, King John!

You can read more about the Oregon Shakespeare Festival's production in a review of their 2015 season by Michael W. Shurgot (Shakespeare Bulletin 34.2 (2016): 307-21). Note: Those with Project MUSE access can click here to go directly to the article.
The play at the Guthrie's website.
Copyright 2008-2039 by kj at 6:00 AM