Book Note: A Night in the Emperor's Garden 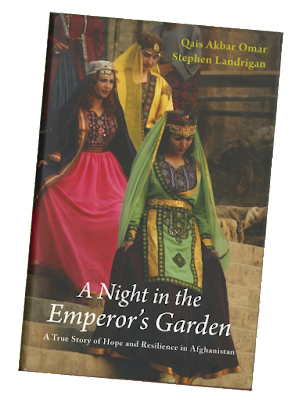 Omar, Qais Akbar, and Stephen Landrigan. A Night in the Emperor's Garden: A True Story of Hope and Resilience in Afghanistan. London: Haus Publishing, 2015.
An alert reader helped me track down a copy of this book not long after Stephen Greenblatt mentioned it in a "400th anniversary of Shakespeare's death commemoration" piece.

The book recounts the story of a production of Love's Labour's Lost in Afghanistan. The story is genuinely fascinating (even though the recounting is fairly staid and occasionally banal).

One of the enduring questions of non-Anglophone productions of Shakespeare is "Why that play?" and the question was, for me, foregrounded by the choice of Love's Labour's Lost. The play is dense and complicated—particularly linguistically—and it's not a common choice. The book explains that the plot was the key element of the decision—a play about the relationships between the genders being complicated by vows to avoid romance seemed telling for the culture at hand.

The arc of the narrative reminded me heavily of A Dream in Hanoi (for which, q.v.). The initial excitement is infectious; tensions arise within the cast; tensions between the cast and the director come to a head; the production goes forward to a [no spoilers!—triumphant? disastrous?] performance.

Let me provide a few brief glimpses into the book. You'll see that the writing (particularly when dialogue is being conveyed) lacks fire, but you'll also see the intensely interesting glimpse into cross-cultural Shakespeare. [Note: Click on the images to enlarge them.]

An early discussion about what Shakespeare can say to Afghani cultures: 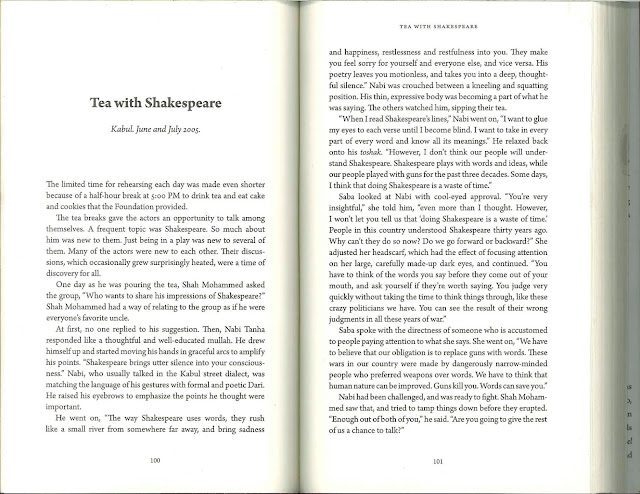 Discovering that the company needs to find a different way to portray the Muscovites of Shakespeare's original production: "We cannot be Russians": 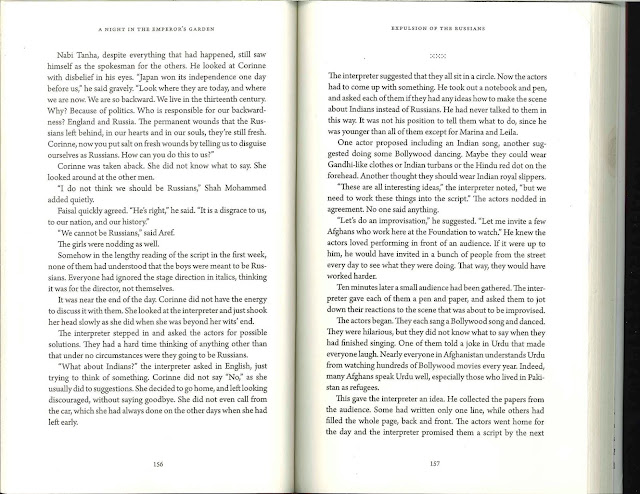 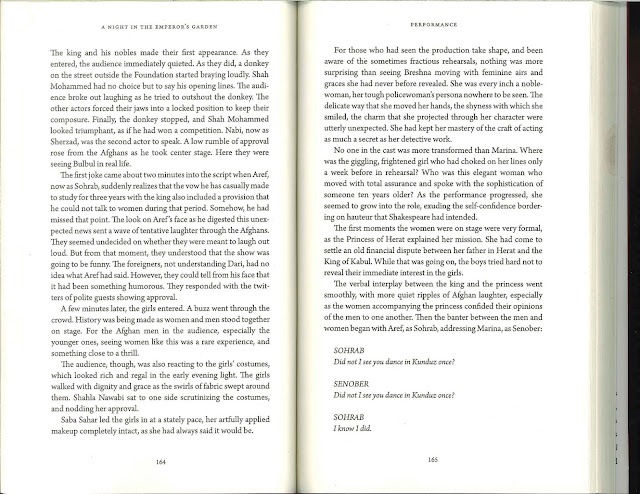 Description of a performance, continued: 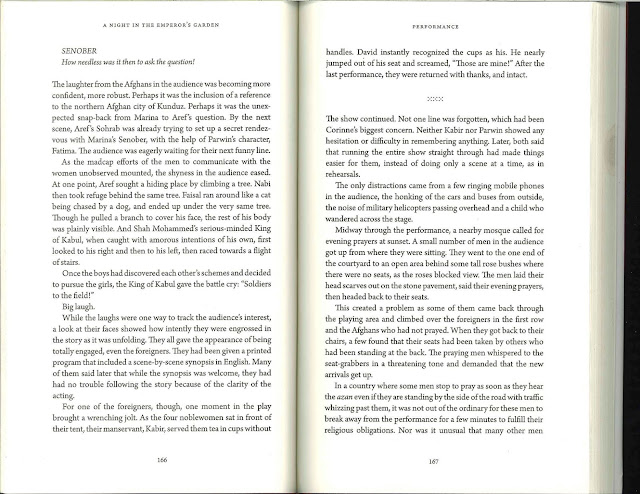 Description of a performance, continued—detail about the Muscovite (now Bollywood) scene: 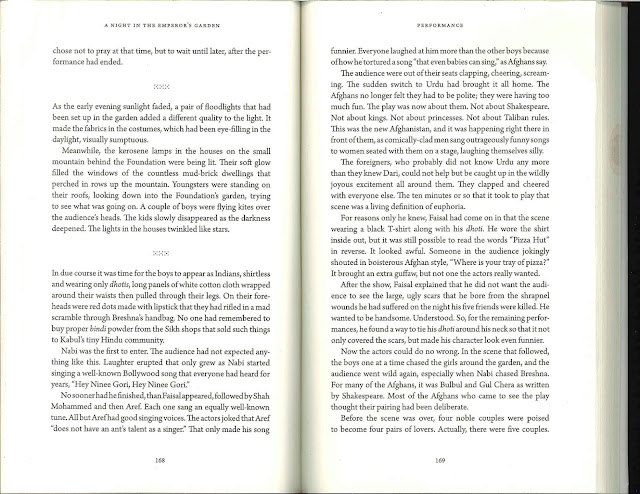 I highly recommend the book. It has all the elements I find most fascinating about non-Anglophone productions of Shakespeare, including finding ways for the local culture to find expression in their production.
Update: An earlier version of this material was published under the title Shakespeare in Kabul. That edition, unlike this one, has a series of photographs of the performances. I'm providing a few of them below—they do help give the narrative a visual context. 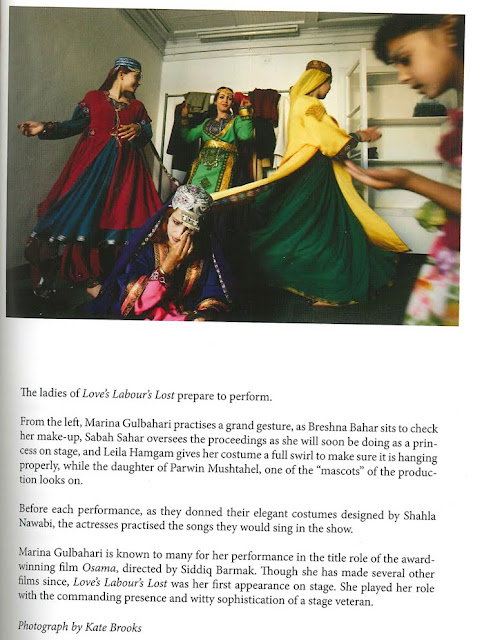 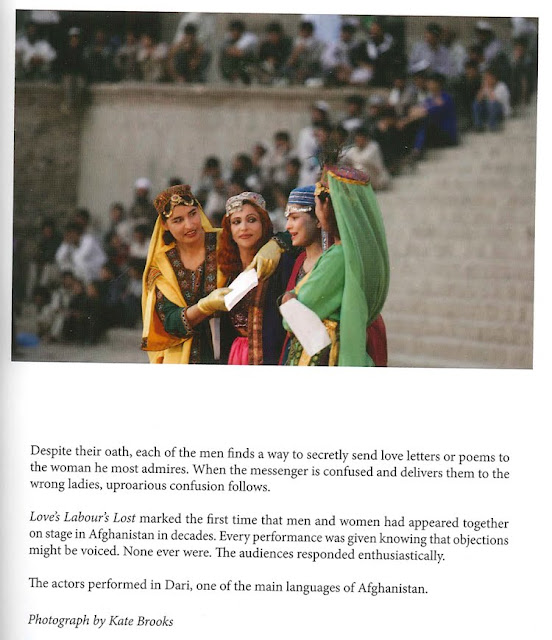 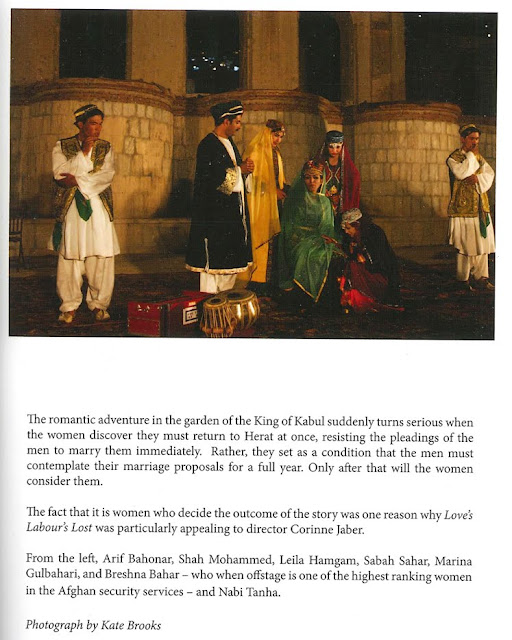