Shakespeare in I Dream of Jeannie 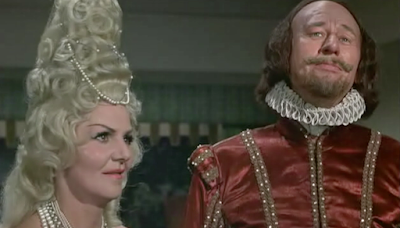 "The Girl Who Never Had a Birthday, Episode 2." By Sidney Sheldon. Perf. Melissa Joan Hart, Caroline Rhea, and Beth Broderick. Dir. Claudio Guzman. I Dream of Jeannie. Season 2, episode 11. NBC. 21 November 1966. DVD. Mill Creek Entertainment, 2015.
Here's a bit more of Shakespeare the man (rather than Shakespeare the words) in an American sit-com.

In this case, it's a sit-com I watched growing up—in reruns, at least: I Dream of Jeannie. Shakespeare finally makes his brief appearance in the second of a two-part (!) storyline in which Jeannie realizes that she doesn't know when her birthday is. After far too many bizarre machinations, they finally determine on a date to celebrate—only to realize that they can't invite anyone to the party.

Not a problem! With a nod of the head, Jeannie summons up a crowd of guests from the past—including good old Shakespeare. I have two clips for you. The first takes us to the bare essentials of Shakespeare's appearance:


The second clip gives you the context of the first. I include it for the dedicated devotee who wants to see who else came to the party. I'm partial to Sigmund Freud myself, but that may be because I grew up in the Bill and Ted's Excellent Adventure era. Enjoy!