Orson Welles and Lucille Ball do Romeo and Juliet 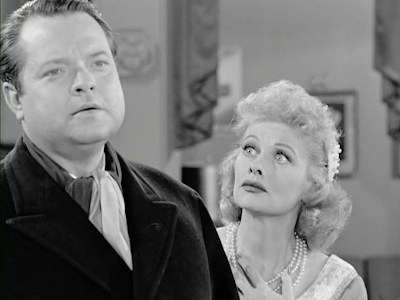 "Lucy Meets Orson Welles." By Madelyn Martin; Bob Carroll, Jr.; Bob Schiller; and Bob Weiskopf. Perf. Lucille Ball, Desi Arnaz, Vivian Vance, William Frawley, and Orson Welles. Dir. James V. Kern. I Love Lucy. Season 6, episode 3. CBS. 15 October 1956. DVD.
Every year in my Shakespeare and Film course, during the class session after the midterm examination and before spring break, I host a day of Mystery Shakespearean Adaptations. It's different every year, and some years it's more successful that others. Thanks to a post by Shakespeare Geek, I tried an episode of I Love Lucy with Orson Welles. I hope that it will usefully tie the first half of the course, which briefly addressed the film Me and Orson Welles (for which, q.v.), and the second half, which will have Orson Welles' Macbeth (for which, q.v.) as one of its central films.

The episode was well-received. There's the usual Lucile Ball wackiness, and there's a wonderful scene where Lucy lays on the flattery and Orson, in his dry, inimitable way, eats it up and ends up delivering Romeo's death speech:

Most impressive about that scene is the way even Lucy's frenzy calms as the language of Shakespeare takes over (and Ricky also notices something marvelous in the speech and its delivery). And Orson Welles' voice certainly is something astonishing.
Links: The Episode at IMDB.

It is a little clunky, but I like the shot / reaction shot pattern for this small clip. It heightens the effect of Welles' great speech by showing us how overawing it is.