Warm Bodies: Now with the Balcony Scene from Romeo and Juliet 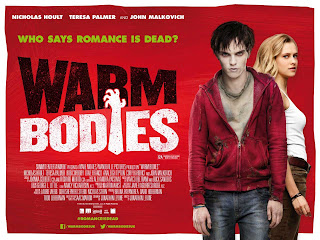 Warm Bodies. Dir. Jonathan Levine. Perf. Nicholas Hoult, Teresa Palmer, and John Malkovich. 2013. DVD. Summit Entertainment, 2013.
Some years ago, I wrote a post on the novel Warm Bodies (for which, q.v.). It's taken awhile, but, thanks to a student who presented on the film (students are wonderful, aren't they?), I've finally gotten to the film.

Essentially, the student got me interested again in noting that, at the end (spoiler alert, people), R (the Romeo analogue) takes exactly the opposite course from that which Romeo (of Shakespeare's play) takes.  Romeo goes from life to death because of love; R goes from death to life because of love.

Yes, it's cheesy, but it's also interesting. The film attempts to rise above typical zombie movie fare, for a time looking more like an allegory than a zombie film: we're all the walking dead without love.

In any case, it's still not my cup of tea (the subtitles in the clip below are a clue to my having watched the film at three times the speed with the subtitles on), but I would be remiss if I didn't present the balcony scene from the film, with its touch of Julie (the Juliet analogue) delivering a modernized version of this speech from Romeo and Juliet:


How camest thou hither, tell me, and wherefore?
The orchard walls are high and hard to climb,
And the place death, considering who thou art,
If any of my kinsmen find thee here. (II.ii.62-65)

Everything about how he re-invents the R & J love story is interesting. I recently got to talk to Mr. Marion and we did a Q&A for my scent blog about his masterful use of scent in his books. He's the real deal!

This is my version of the perfect Valentine's Day movie- blood, guts, and a sappy love story. With a nice dose of sarcastic humor. Perfection.