A Return to Prince of the Himalayas 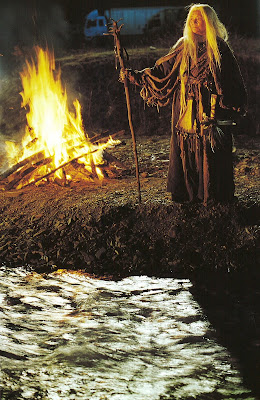 Prince of the Himalayas [Ban dao yin xiang; a.k.a. Ximalaya wangzi]. Dir. Sherwood Hu. Perf. Purba Rgyal, Dobrgyal, Zomskyid, Sonamdolgar, Lobden, and Lopsang. Hus Entertainment, Shanghai Film Studios. 20 October 2006.
Every other year, I try to incorporate Prince of the Himalayas (for which, q.v.) into my Shakespeare and Film course. I'm always hampered by the film's distressing lack of availability. But I'm going to throw caution to the winds this year and explore this film in some considerable depth.

For one thing, it's the only derivative of Hamlet covered in Simon Crowl's Screen Adaptations:  Shakespeare’s Hamlet:  The Relationship between Text and Film, which I've adopted as a textbook for the course this year.

For another thing, it's quite an incredible film. I've given a fairly-extensive plot summary here, but I didn't provide more than a trailer at that point. I was still (and am sill) desperately hoping for a theatrical or DVD release of the film. But, since I haven't heard any rumblings for several years, I think it would be all right to give a sample here.

In this scene, Lhamoklodan, the Hamlet analogue, has returned to ask one simple but enormous question: "Why?" His mother thinks he means "Why did my father have to die?" but he really means "Why did you bury my father before my return?" You can observe the answer to that question in the clip. You'll then also see Odsaluyang (the Ophelia analogue) welcoming Lhamoklodan home.

Finally, you'll see the pomp and circumstance of the installation of Kulo-ngam, the Claudius analogue. As you watch it, note the response of one of the high officials:


That's Po-lha-nyisse (can you guess whose analogue he is?) reacting with shock to the idea of Kulo-ngam and Nanm marrying. That moment is fascinating. It gives us insight into one possible reaction to the marriage of Kulo-ngam to his brother's widow—and that reaction doesn't come from Lhamoklodan. We would expect Lhamoklodan to feel that way, but this is the Polonius analogue (had you guessed that already?), and those are usually on the side of any Claudius analogues out there.

I'm actually getting more and more excited about the prospect of taking a deep, hard look at this film with my class—and I continue to hope for a US DVD release at some point!
Links: The Film at IMDB.
Copyright 2008-2039 by kj at 5:00 AM

The movie stayed very true to the original plot of Hamlet, but the change of setting and a few extra touches made it worth a revisit. Main difference was the bigger emphasis on a battle on the spiritual level, maybe reminiscent of Tibetan Buddhist traditions and notions of karma and rebirth.