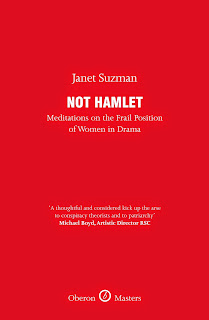 Suzman, Janet. Not Hamlet: Meditations on the Frail Position of Women in Drama. London: Oberon Books, 2012.
I read this book some time ago and set it in a pile of things to make a few notes about. It's a delightful excursion into the history of women in the theatre by a marvelous woman of the the theatre. I like Janet Suzman best not for her Cleopatra but for her direction of an Othello produced in South Africa under Apartheid (for which, q.v.).

I like this book best not for its contents (which are quite good) but for the section entitled "A Rogue Prologue:  A Heartfelt Plea for a Bit of Common Sense." In it, she takes on the authorship doubters, whom she calls "time-wasters" (14), and the film Anonymous (for which, q.v.).

She goes on at considerable length, but I'd like to give you all just a quick sample of her thoughts and her style


In 2011 a murky and far-fetched film was released —Sony-backed, shame on them wasting their money on
such a bad subject—called Anonymous, the invented story of how this poor put-upon Earl of Oxford was the teal author of the plays. No facts to back it up, just wild submissions and some quite good cinematography of the gloomy historical documentary kind. Some months before seeing it, I had been invited to a debate before it went on release, where incidentally it received universal critical trouncings. Professor Stanley Wells, the Rev. Dr. Paul Edmondson, and Professor Michael Dobson of The Shakespeare Institute and the University of Birmingham were present to defend William. To traduce William were present the director of the film, Roland Emmerich (bet they couldn’t find a British director to do the hatchet job), a distant descendant of the Earl’s, and a little man from a small but perfectly misguided suburban university which gives degrees in maligning Shakespeare and whose name I have forgotten . . . .

Roughly this is how their batty film version goes: Oxford was always secretly writing plays, having written Midsummer Night’s Dream when he was about eight years old and henceforth entranced with his own prodigiousness, he continued in secret. But how was he to get these works into the playhouses without revealing his blue-blood? The Queen would have had him topped had she known. Thus Oxford, desperate for a theatrical conduit, singles out Ben Jonson, playwright, needing money for a reason I cannot now recall, and Ben is duly blackmailed and sworn to silence—a brilliant writer libeled beyond recognition.

Oxford could now feed his plays through Jonson’s bribed hands to reach the actors. However, one day a doltish and illiterate member of the acting company—justify an illiterate actor to me please—namely one William Shakespeare, finds out about the deception and so poor Ben has to pay him clandestinely, courtesy of the rich earl, to keep his mouth shut. Oh, and for the use of his nice name. Thus it is that he, dim-witted Will, got all the kudos for the huge success of these plays. We should be thankful that comical Will Kempe wasn’t chosen as the dupe in this film—a close call; consider the dull thud of The Royal Kempe Company.

Has it never occurred to this bunch of dreamers how such a daft plot, might work in a busy theatre company? Their scenario only works off torture and bribery anyway. There wouldn’t be enough money in the universe to stop all the actors in a company from blabbing till Doomsday, let alone the masses of other people involved in a theatre company; the tirers delivering head dresses, the sewing women mending torn costumes, the butchers and bakers and candlestick-makers. No whispers and sniggers about such a plonking modus operandi, a deception stretching over twenty-five years? Did this doltish William of theirs never crow in his cups about his secret benefactor and his growing wealth? Did the Company never notice how illiterate Will had suddenly turned scribe, brandishing inky cue-sheets under their noses, scribbly fingers freshly stained? Did no one ever mark how rewrites—for rewrites there surely were—happened only after this William returned from a loo-break? We must assume the author earl was in the building that day skulking about in the gods ready for consultation. You think the cleaning-woman didn’t spot him as she swept up the vomit and hazelnut shells? A conspiracy, you understand, demands silence from everyone; unattainable in a theatre company, with skittering boys and prying eyes all on the loose in a building with no doors to shut on secrets. If they didn’t blab they were inhuman, and actors are all human, that’s for sure.

It becomes increasingly evident that the Oxfordian view of human nature is just a touch—well, out of touch. What do people do? They gossip. Universally, they gossip. To this day and forever, they gossip. What makes Oxfordians think human nature has changed? A mystery. When all is said and done the reason why William Shakespeare’s plays remain as vibrant as ever is because human nature hasn’t changed; they tell us stories about recognisable human beings. All of them with natures like ours, some the size of giants, others our size, all of them recognisably us in extremis. These guys have badly lost the plot. (17-21)

She continues in that vein for some time. I found it awfully refreshing to hear the voice of a woman of the theatre—not a trained Shakespeare scholar but a vibrant, life-long participant in the theatre—telling it like it is—and was.
Click below to purchase the book from amazon.com
(and to support Bardfilm as you do so).