Book Note: Anyone But You 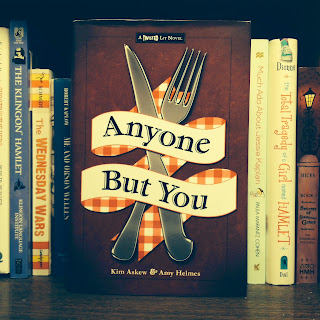 Askew, Kim, and Amy Helmes. Anyone But You. Avon: Merit Press, 2014.
Careful readers of the blog will remember a post on the "Twisted Lit" series of Shakespeare books (for which, q.v.). Well, they've released another one.

Anyone But You is the Twisted Lit. answer to Romeo and Juliet, and half of it is pretty interesting. I've read the book myself and I've talked to a member of its target audience, and we agree that the Romeo and Juliet sections are less than intriguing. The better half of the novel addresses a possible backstory for the feud.

In the novel, Romeo and Juliet (Roman and Gigi to us) come from rival Italian restauranteurs. That section is pretty straightforward—with the usual over-the-top current teen drama thrown in. It's also fairly dull. The backstory involves how they came to be rivals, and it's much more interesting. There's considerable back-and-forth between two boys growing up in Chicago between the World Wars. I won't give you more than that, because that's worth reading. But you might want to sip every other chapter until the last thirty pages of the book.