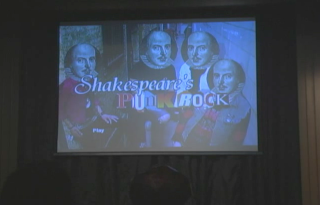 The DVD presents a night at a comedy club. There's a little stand-up, a few songs, some thoughts about acting, a bit of craziness, and very little Shakespeare.

To be fair, it might have been fun to attend this show live—but watching it on a DVD was fairly tedious.

Here's a clip for you—it's a bit of the opening (which talks about how comedy is a bit like Shakespeare) and a bit of the stand-up.