FoxTrot and the Eyes of March 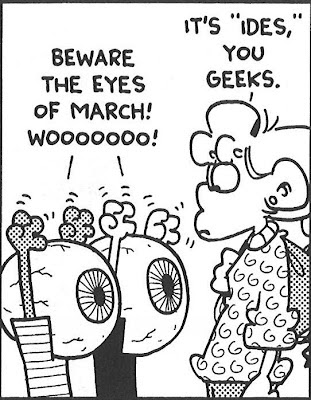 Amend, Bill. "Beware the Eyes of March." Your Mamma Thinks Square Roots are Vegetables. Andrews McMeel: Kansas City, 2003. 114.
The Ides of March always seems to call for a comic of some sort.

But where could we search for such a thing?

Would Bill Amend, the creator of FoxTrot, be willing to oblige us with one?

As a matter of fact he would.

And now that I've filled this space with a few brief sentences, we can turn to it.

Thanks, Mr. Amend, for this delighful take on the Ides of March.

Here it is (click on the image to enlarge it):