Did Shakespeare Write "Some words may hide others"?

Arthur and the Invisibles. Dir. Luc Besson. Perf. Freddie Highmore, Mia Farrow, Madonna, Ron Crawford, Penny Balfour, Snoop Dogg, David Bowie, David Suchet, Jimmy Fallon, Robert De Niro, and Jason Bateman. 2006. DVD. Weinstein, 2011.
Besson, Luc. Arthur and the Minimoys. New York: HarperCollins, 2002.
Besson, Luc. Arthur et les Minimoys. N.p.: Intervista, 2002.
The inimitable Shakespeare Geek called the Internet's collective attention to this film back in early 2007. I've found time to listen to the audiobook Arthur and the Minimoys, on which the film is based, and to watch the film. The story is about a boy's attempt to find his grandfather and to save the farm. His grandfather had done a lot of work in Africa in his life; he disappeared mysteriously some years ago.  Fortunately, he left behind a number of journals about Africa and some clues to follow.

The quotation is problematic. As the image above shows, a banner hangs in the grandfather's study:


"Some words may hide others."
—William S.

The first problem is that Shakespeare didn't say that (though there are many people on the Internet who provide that quote as if he did).

My tentative conclusion is that the quotation is a deliberate misattribution. I believe that, in the story of the film, the Grandfather (who elsewhere leaves the clue "To get to the land of the Minimoys, put your trust in Shakespeare"), intentionally printed a quotation that was not by Shakespeare on the banner so that the unwary would not think too deeply about the quote while those who are either in the know or curious enough will investigate further.

The words on the banner literally hide other words. The boy holds a candle in front of the banner and is able to read the words through its fabric, learning how to start searching for his father.

Further bulletins as events warrant; in the meantime, enjoy this brief clip that contains two scenes from the film:

Update:  3 April 2013.  As I investigate the questions raised by this post, I'll put up the relevant data. Below you will find the relevant pages from the English-language edition of the book: 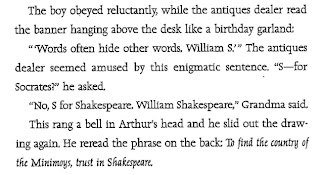 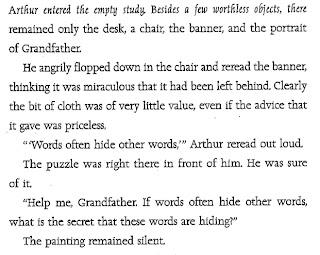 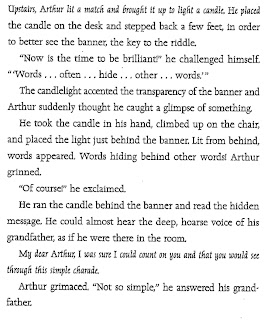 Update:  9 April 2013.  I've obtained the French language edition of the novel. The phrase in question is "Les mots en cachent souvent d'autre." It does not seem to appear on web pages before 2008 (and it is not attributed to Shakespeare at that point), making the theory that the book itself invents the phrase more viable.  Here are the relevant extracts from the French edition: 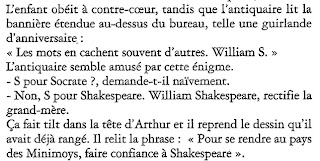