Cavafy's "The Ides of March" 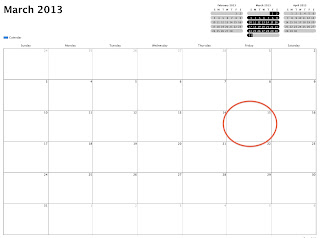 Cavafy, C. P. "The Ides of March." The Collected Poems of C. P. Cavafy: A New Translation. Trans. Aliki Barnstone. New York: W. W. Norton, 2006. 42.
Yesterday, I glanced through a volume of Cavafy poetry that had come my way, and I chanced upon a poem from 1911 entitled "The Ides of March." Although Cavafy clearly knew Shakespeare—his "King Claudius" (for which, q.v.) is stupendous, for example—I don't know whether he had Shakespeare's version of the assassination of Julius Caesar in mind when he wrote the poem. I, of course, like to think that he had Shakespeare's Artemidorus in mind (even though Shakespeare's spelling is -us while Cavafy's is -os).

In Julius Caesar, Artemidorus attempts to present Caesar with a letter of warning when he arrives at the Senate on the Ides of March. While waiting, he has this small speech:


Here will I stand till Caesar pass along,
And as a suitor will I give him this.
My heart laments that virtue cannot live
Out of the teeth of emulation.
If thou read this, O Caesar, thou mayst live;
If not, the Fates with traitors do contrive. (II.iii.11-16)

When Artemidorus presents his letter, saying, "O Caesar, read mine first; for mine's a suit / That touches Caesar nearer. Read it, great Caesar" (III.i.6-7), Caesar refuses: "What touches us ourself shall be last serv'd" (III.iii.8). Cavafy's poem focuses on that moment:


The Ides of March

O soul, fear greatness.
If you can't overcome your ambitions,
follow them with hesitation and caution.
And the more you advance, the more
probing and attentive you must be.

And when you reach your zenith, now a Caesar;
and you take the role of a famous man,
be particularly alert when you go out in the street,
a powerful man in the public eye with an entourage;
if it happens that some Artemidoros from the mob
draws near, bearing a letter,
and says urgently, "Read this at once,
it deals with an important matter concerning you,"
don't fail to pause, don't fail to postpone
any speech or task; don't fail to ward off
those who greet and pay homage to you
(you can see them later); let even the Senate
wait, so you will know right away
the grave writings of Artemidoros.