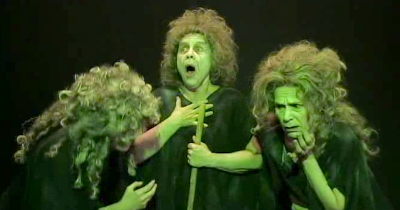 Never Say Macbeth. Dir. Christopher J. Prouty. Perf. Tammy Caplan, John Combs, and Scott Conte. 2007. DVD. Gold Cap Films, 2007.
And then there's Never Say Macbeth. Never Say Macbeth is well-conceived and well-written, and the animated opening sequence looks very professional, but the production values of the rest seem a bit amateurish. It's comparable to a self-published book. The film has some funny and interesting parts, but it hasn't been subjected to the same rigor that other films face.

Still, I enjoy the concept enormously! The main character is a scientific sort. His girlfriend gives up her teaching job to pursue her dream of acting. He follows her and gets involved with a number of actors putting on a production of the Scottish play. Skeptical and unappreciative, he says "Macbeth" at some point during rehearsals, brining a curse down on the company. The curse is that he (and anyone else who says "Macbeth") sees the ghosts of actors who died in a theatre fire years ago. Some of the ghosts are still playing their roles from Macbeth, others come from The Importance of Being Earnest or The Pirates of Pensance. That alone makes up a good part of the humor of the film—especially when those three worlds collide with the current production of Macbeth.

Here's a brief clip to illustrate the general premise of the film:


In short, the film is interesting in its conception, has higher production values than a YouTube video, and presents some likable characters. But it isn't one you'll be returning to again and again. I wish it had been more professionally done.

Note: The opening sequence was done by Gang of Seven Animation, and their part is the most professional part of the entire production.
Links: The Film at IMDB.