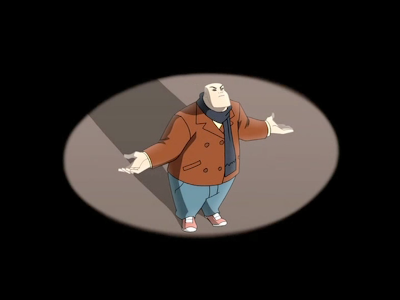 Great to see this posted!

The second quote (from Henry VI, Part 2) is especially revealing of the character. Harry Osbourne is Peter Parker's erstwhile best friend, who (seemingly) becomes his nemesis, the Green Goblin, before (seemingly) recovering and reforming. It's all very confusing, but it relates beautifully to the Hal/Henry V line he quotes: "Presume not that I am the thing I was."

Thanks for the comment, Alexi! That's exactly the sort of insight I was hoping for—from someone familiar with the show. That there are deeper meanings is plain; what those deeper meanings are is more obscure.

Measure for Measure quote: "...excellent to have a giant's strength..." is on the surface a reference to a guy who becomes a villain after alien spores make him grow into a giant.

However, again, the writers of the cartoon are pretty smart and clearly bardaloters. The "giant" is John Jameson, the son of the newspaper mogul. He is an astronaut, national hero, and the ultimate boy scout - paralleling Angelo before possessing "a giant's strength"

I could easily give you 500 words on each quote and the context/relation to S' play.

Thanks, David! I'd be glad to hear your thoughts. I can tell that there's more than just the surface to these particular choices—the writers were particularly thoughtful—and I'm glad to have some additional insight!

There are two more episodes of Spectacular Spider-Man, featuring Shakespeare. One ("Subtext") shows rehearsals of Dream to bookend the episode. The other ("Opening Night") shows the actual production of Dream as counterpoint to the action throughout the episode.

Thanks for the comments! These are mentioned in the second part of this two-part post.

The Measure for Measure quote is probably as close as Shakespeare got to the most famous line in Spider-Man, which is often quoted as if it were Shakespeare: "With great power comes great responsibility."

Most of the cast seem to be choosing a Shakespeare quote as a medium of self-expression, as in the Harry Osborn example another character explained. The exceptions are Sally Avril the cheerleader and Flash Thompson the jock, who, true to their basic stereotypes, have no idea what the hell they're saying and touch on the story's ongoing themes entirely by accident.

The best performer, the only one to get a standing ovation, is the red-haired Mary Jane, which would be no surprise to Spider-Man fans: in some versions of her story, she grows up to be a modestly successful actress.

Thanks, T. Campbell. That's quite insightful. Clearly, there's much food for thought here!