The Conflation of Three Weïrd Sisters in Joe Macbeth 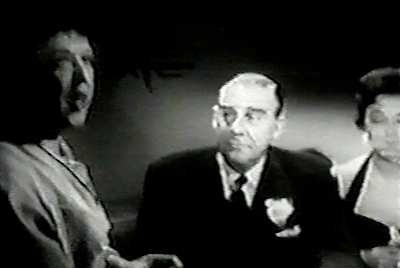 Joe Macbeth. Dir. Ken Hughes. Perf. Paul Douglas and Ruth Roman. 1955. DVD. Lear Media, n.d.For some time, I've wanted to return to Joe Macbeth, the 1955 derivative of Shakespeare's Scottish play. I've written and lectured on its version of the dagger scene (for which, q.v.), but I haven't mentioned the film's use of the three witches.

In Joe Macbeth, the three weïrd sisters are boiled down to one elderly, flower-selling, chestnut-roasting woman named Rosie. And that one weïrd sister brings Shakespeare more directly into this derivative. I'm not quite sure whether Joe Macbeth is joking or not when he says, "I sure would have liked to have seen you when you played opposite Barrymore," but the remark spurs Rosie on to deliver the line "When shall we three meet again— / In thunder, lightning, or in rain?" (I.i.1-2). It's almost as if she's gathering all the witches into her own character at that point.

After that, Rosie turns to the Tarot cards and reads them according to Shakespeare's script—while Lily, the Lady Macbeth analogue, watches. First, the cards reveal the Robber Baron. Joe notes that that's his current role. Then the "Lord of the Castle" card shows up, and Lily notes that it looks like the House on Lakeview Drive. Tommy, who has just been killed off, was the one in charge of that house. Finally, the King—"The King of Darkness"—makes an appearance. But Macbeth objects: "The Duke is the Kingpin. What are you trying to pull, Rosie?"

The next exchange takes this all to a new level. Rosie answers with this line: "It's in the cards." Lily then adds this: "It's not only in the cards. It's in you, Joe."

The line ties Macbeth to Julius Caesar: “The fault is in the cards and in ourselves that we are underlings.” And the rest of the film seems to explore the possibilities of that idea. Can it be blamed on the cards? Are the cards essentially irrelevant? Do they both work together to bring about the plot's course of events?

Here's the scene in question. Even though the film quality is poor, the significance of the scene is high: