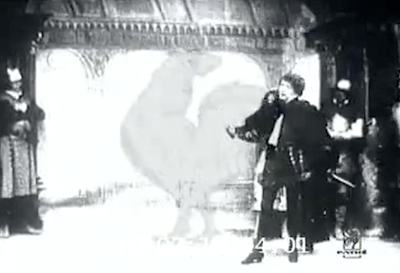 She's also known for playing Hamlet—and for playing the role with remarkable energy and verve.

I don't know how this clip made its way onto YouTube, but it did. It's a nearly-two-minute-long film of the duel scene from Hamlet, and it's the only extant clip of her in that role:


The giant chicken silhouette adds an air of the surreal to the clip, but I don't think we can read much into it beyond assuming that it's part of the film developing process. Either that or it's a shadowy echo of Horatio's lines in the play's first scene:

Or is that reading too much into it?
Note: I'm informed by Twitter user @silent_london that the rooster image is the logo of the Pathé company. According to @silent_london, all their early films contain the logo, though it usually isn't as large as it is in this film.
Links: The Film at IMDB.
Copyright 2008-2039 by kj at 10:00 AM