Romeo and Juliet Get Married 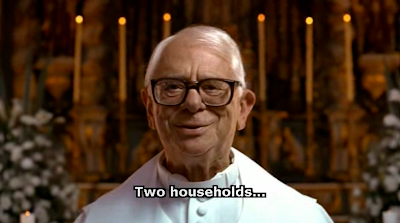 Soccer. It's all about the soccer.

Romeo is a deeply-devoted fan of the Corinthians, while Juliet has been attending Palmeiras games with her Italian-Brazilian father ever since she was a little girl. To woo her, Romeo has to pretend to be a Palmeiras fan.

I don't think I'm giving anything away by saying that trouble and hilarity ensue when their families find out that they want to marry supporters of the rival team. And, if you want to have a spoiler about the end of the film, take a look at the title!

All in all, not a bad film—some good stock characters, some good soccer footage (football footage sounds better but might confuse those in the American audience), a nice romance, and a happy ending.
Links: The Film at IMDB.