Another Return to Measure for Measure 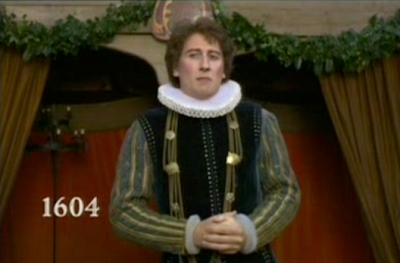 A Waste of Shame. By William Boyd. Perf. Rupert Graves, Tom Sturridge, Indira Varma, and Anna Chancellor. Dir. John McKay. Shakespeare Retold. 2005. DVD. Open University / BBC, 2005.
The incomprehensible magic of iSquint, combined with other programs, has enabled me—for educational purposes only—to conquer the Region Two DVD Barrier. I recently learned of a derivative version of Measure for Measure released in the UK, and I needed to be able to view it in the US.

But I told you that to tell you this.

When I converted the extracted file with iSquint, I realized that I might be able to do the same with another Region Two purchase from some time ago: The Shakespeare Retold series' A Waste of Shame. And if I could convert it, I could provide an extract from it, something I'd hoped for since I last wrote on the work (for which, q.v.).
Here, then, is the speech in question. We are to imagine it being presented to an audience (amongst whom is Shakespeare himself) in 1604:

I'll have to write about the new derivative later—once I've had time to view it!
Links: The Film at IMDB.