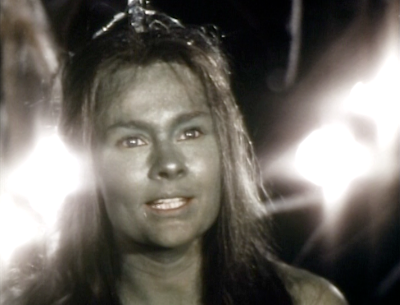 A Midsummer Night’s Dream. Dir. Peter Hall. Perf. Helen Mirren, David Warner, Diana Rigg, Michael Jayston, Ian Richardson, Judi Dench, Barbara Jefford, and Ian Holm. 1968. DVD. Water Bearer Films, 2004.
Another phenomenal recent addition to Bardfilm's Shakespeare and Film Library is this 1968 Midsummer Night’s Dream. The phrase "all-star cast" is probably bandied about too much, but I can't think of an easier way to describe this film. Indeed, I can't imagine why I've never seen this before! In addition to the stupefying trio of Helen Mirren, Diana Rigg, and Judi Dench—let us pause for a moment in reverent awe—we're given the top-notch talents of David Warner, Michael Jayston, Ian Richardson, Barbara Jefford, and Ian Holm! Egad!

I haven't seen this in its entirety, but I was thrilled by the speech Helena makes to close Act I, scene i ("How happy some o'er other some can be!"). Diana Rigg gives us just the right tone: it's deep but not too serious.


The cinematography is interesting, but it's a bit hit-or-miss. Occasionally, it tends toward the avant-garde (indeed there are some passages that may not be appropriate for all audiences) and not altogether successfully. Still, the performances are remarkable. It's a film that must be added to your library immediately.
Links: The Film at IMDB.

I have watched this movie, in its entirety. Have, in fact, a copy of it on tape. It is dreck. Hall failed to make the movie a serious comment on love, while rendering a slapstick comedy with serious overtones into a dirge without humour.

P.S. I just stumbled across your blog, and all I can say is Thank you! Love it. This is an excellent resource, as I love the obscure things bard, too.