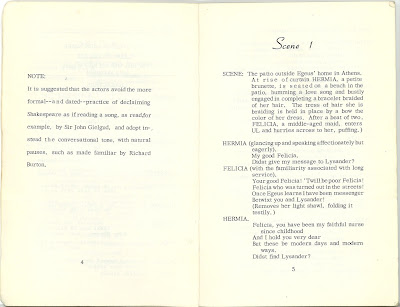 McMahon, Luella. The Lovers in Midsummer. Chicago: The Dramatic Publishing Company, 1970.
Something odd just fell off my shelf. I used to remember the history of most of the books I have—it's part of the joy of book ownership to be able to say, "Oh, yeah! I got that at Lobster Lane Books in the late 1990s" instead of "Oh, yeah! I downloaded that to my Kindle at an airport somewhere sometime." But I have no idea where this volume came from!

It's a pretty maudlin adaptation of A Midsummer Night's Dream designed (I deduce from the chart on where Upstage Left is) for amateur productions. It cuts the rude mechanicals, adds a maid named Felicia for Hermia, and gives us some Shakespeare-sounding speeches—e.g., "But these be modern days and modern ways" (5).

What struck me, however, was the opening advice. We are advised to avoid "declaiming Shakespeare as if reading a song, as read, for example, by Sir John Gielgud" and to follow the manner "made familiar by Richard Burton" (4) instead. Embodied in that brief note is a really interesting slice of stage history—and one that continues to evolve. Contemporary amateurs might be advised to avoid the Burton and cling to the Branagh—or to skip the Branagh and go for the Tennant approach. 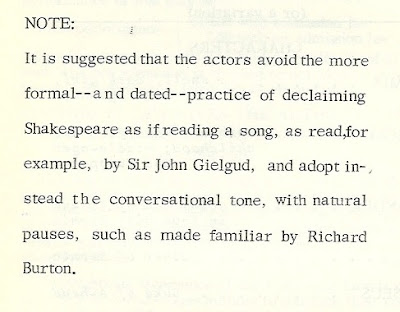 There are a few used copies available at amazon.com—starting at $15.00. Perhaps I won't put this out on the free table after all!


Click below to purchase the play from amazon.com
(and to support Bardfilm as you do so).