Hamlet. Dir. Michael Mundell. Perf. Simon Pegg and Nick Frost. 2003. DVD. Hurricane Int'l, 2007. I recently received a DVD box set of British TV Shakespearean tragedies. Among the three was a Hamlet. I though it might be an interesting one to use for the final exam, so I skimmed through it. Although not at all stellar, it did make some interesting decisions. It starts with a bright festival atmosphere that descenes into anarchy, for example.

I was also interested in the casting choices. It seems to me that the Ophelia is clearly older than Laertes. (Out of fear that I was misreading the ages—which I’ve been known to do before—I canvassed a few people who agreed that this Ophelia looks older than this Laertes. I also tried to Google the ages of the actual actors, but I was only able to find Ophelia’s true age. But feel free to correct me if I’m in the wrong here.)

It makes Laertes’ advice to his sister interesting if she is, in fact, older than he is. I think it makes it much less appropriate—to a modern audience especially—if he’s giving advice to a sister who is some years his elder. 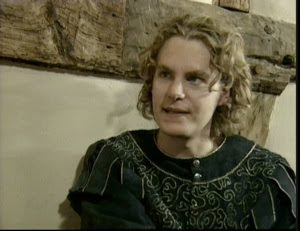 I totally think she's older. Ophelia is pretty easily controlled by the other men in her life, but Laertes holds little control over her. She values his opiion enough to heed his warning, but with a sort of teasing discernment, while also putting him in his place.

Interesting. Does that increase the condescension we see toward her from the other characters?