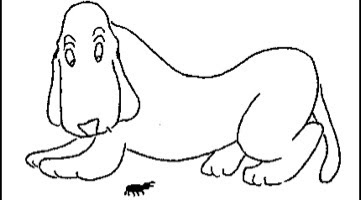 Thurber, James. “The Macbeth Murder Mystery.” My World and Welcome to It. By James Thurber. New York: Harvest, 1969. 33-39.
All those who read Macbeth should read this short story by James Thurber. The closer you are to your reading of the play, the funnier the story will be.

[Note: I’ve silently—and only slightly—edited the text from its original.]

“It was a stupid mistake to make,” said the American woman I had met at my hotel in the English lake country, “but it was on the counter with the other Penguin books—the little sixpenny ones, you know, with the paper covers—and I supposed of course it was a detective story. All the others were detective stories. I’d read all the others, so I bought this one without really looking at it carefully. You can imagine how mad I was when I found it was Shakespeare.”

I murmured something sympathetically.

“I don’t see why the Penguin-books people had to get out Shakespeare plays in the same size and everything as the detective stories,” went on my companion.

“I think they have different-colored jackets,” I said.

“Well, I didn’t notice that,” she said. “Anyway, I got real comfy in bed that night and all ready to read a good mystery story and here I had The Tragedy of Macbeth—a book for high-school students. And I was just crazy for a good Agatha Christie or something. Hercule Poirot is my favorite detective.”

Over her second cup of tea my companion began to tell the plot of a detective story that had fooled her completely—it seems it was the old family doctor all the time. But I cut in on her. “Tell me,” I said. “Did you read Macbeth?”

“I had to read it,” she said. “There wasn’t a scrap of anything else to read in the whole room.”

“No, I did not,” she said, decisively. “In the first place, I don’t think for a moment that Macbeth did it.”

I looked at her blankly. “Did what?” I asked.

“I don’t think for a moment that he killed the King,” she said. “I don’t think the Macbeth woman was mixed up in it, either. You suspect them the most, of course, but those are the ones that are never guilty—or shouldn’t be, anyway.”

“But don’t you see?” said the American lady. “It would spoil everything if you could figure out right away who did it. Shakespeare was too smart for that. I’ve read that people never have figured out Hamlet, so it isn’t likely Shakespeare would have made Macbeth as simple as it seems.”

I thought this over while I filled my pipe. “Who do you suspect?” I asked, suddenly.

“Oh Macduff did it, all right,” said the murder specialist. “Hercule Poirot would have got him easily.”

“How did you figure it out?” I demanded.

“Well,” she said, “I didn’t right away. At first I suspected Banquo. And then, of course, he was the second person killed. That was good right in there, that part. The person you suspect of the first murder should always be the second victim.”

“Oh, yes,” said my informant. “They have to keep surprising you. Well, after the second murder I didn’t know who the killer was for a while.”

“How about Malcolm and Donalbain, the King’s sons?” I asked. “As I remember it, they fled right after the first murder. That looks suspicious.”

“Too suspicious,” said the American lady. “Much too suspicious. When they flee, they’re never guilty. You can count on that.”

My companion leaned toward me, her eyes bright, her teacup quivering. “Do you know who discovered Duncan’s body?” she demanded. I said I was sorry, but I had forgotten. “Macduff discovers it,” she said . . . . “Then he comes running downstairs and shouts, ‘Confusion has broke open the Lord’s anointed temple’ and ‘Sacrilegious murder has made his masterpiece’ and on and on like that.” The good lady tapped me on the knee. “All that stuff was rehearsed,” she said. “You wouldn’t say a lot of stuff like that, offhand, would you—if you had found a body?” She fixed me with a glittering eye.

“You’re right!” she said. “You wouldn’t! Unless you had practiced it in advance. ‘Oh, no, there’s a body in here!’ is what an innocent man would say.” She sat back with a confident glare.

“That’s because they never thought of Macduff,” said the American lady. “It was Macduff, I’m certain. You couldn’t have one of the victims murdered by two ordinary thugs—the murderer always has to be somebody important.”

“But what about the banquet scene?” I asked, after a moment. “How do you account for Macbeth’s guilty actions there, when Banquo’s ghost came in and sat in his chair?”

The lady leaned forward and tapped me on the knee again. “There wasn’t any ghost,” she said. “A big, strong man like that doesn’t go around seeing ghosts— especially in a brightly lighted banquet hall with dozens of people around. Macbeth was shielding somebody!”

“Who was he shielding?” I asked.

“Mrs. Macbeth, of course,” she said. “He thought she did it and he was going to take the rap himself. The husband always does that when the wife is suspected.”

“But what,” I demanded, “about the sleepwalking scene, then?”

“The same thing, only the other way around,” said my companion. “That time she was shielding him. She wasn’t asleep at all . . . She was acting guilty to shield Macbeth.”

“I think,” I said, “I’ll have another brandy,” and I called the waiter. When he brought it, I drank it rapidly and rose to go. “I believe,” I said, “that you have got hold of something. Would you lend me that Macbeth? I’d like to look it over tonight. I don’t feel, somehow, as if I’d ever really read it.”

I read the play over carefully that night, and the next morning, after breakfast, I sought out the American woman. She was on the putting green, and I came up behind her silently and took her arm. She gave an exclamation. “Could I see you alone?” I asked, in a low voice. She nodded cautiously and followed me to a secluded spot.

“You’ve found out something?” she breathed.

“I’ve found out,” I said, triumphantly, “the name of the murderer!”

“You mean it wasn’t Macduff?” she said.

“Macduff is as innocent of those murders,” I said, “as Macbeth and the Macbeth woman.” I opened the copy of the play, which I had with me, and turned to Act II, Scene 2. “Here,” I said, “you will see where Lady Macbeth says, ‘I laid their daggers ready. He could not miss ’em. Had he not resembled my father as he slept, I had done it.’ Do you see?”

“But it’s simple!” I exclaimed. “I wonder I didn’t see it years ago. The reason Duncan resembled Lady Macbeth’s father as he slept is that it actually was her father!”

“Lady Macbeth’s father killed the King,” I said, “and, hearing someone coming, thrust the body under the bed and crawled into the bed himself.”

“I know that,” I said, and I turned to Act II, Scene 4. “It says here, ‘Enter Ross with an old Man.’ Now, that old man is never identified and it is my contention he was Macbeth’s father-in-law, whose ambition it was to make his daughter Queen. There you have your motive.”

“But even then,” cried the American lady, “he’s still a minor character!”

“Not,” I said, gleefully, “when you realize that he was also one of the weird Sisters in disguise!”

“You mean one of the three witches?”

“Precisely,” I said. “Listen to this speech of the old man’s. ‘On Tuesday last, a falcon towering in her pride of place, was by a mousing owl hawk’d at and kill’d.’ Who does that sound like?”

“It sounds like the way the three witches talk,” said my companion, reluctantly.

“Buy a copy of Hamlet,” I said, “and solve that!” My companion’s eye brightened.

“But who,” she demanded, “do you suspect?” I looked at her cryptically.

“Everybody,” I said, and disappeared into a small grove of trees as silently as I had come.