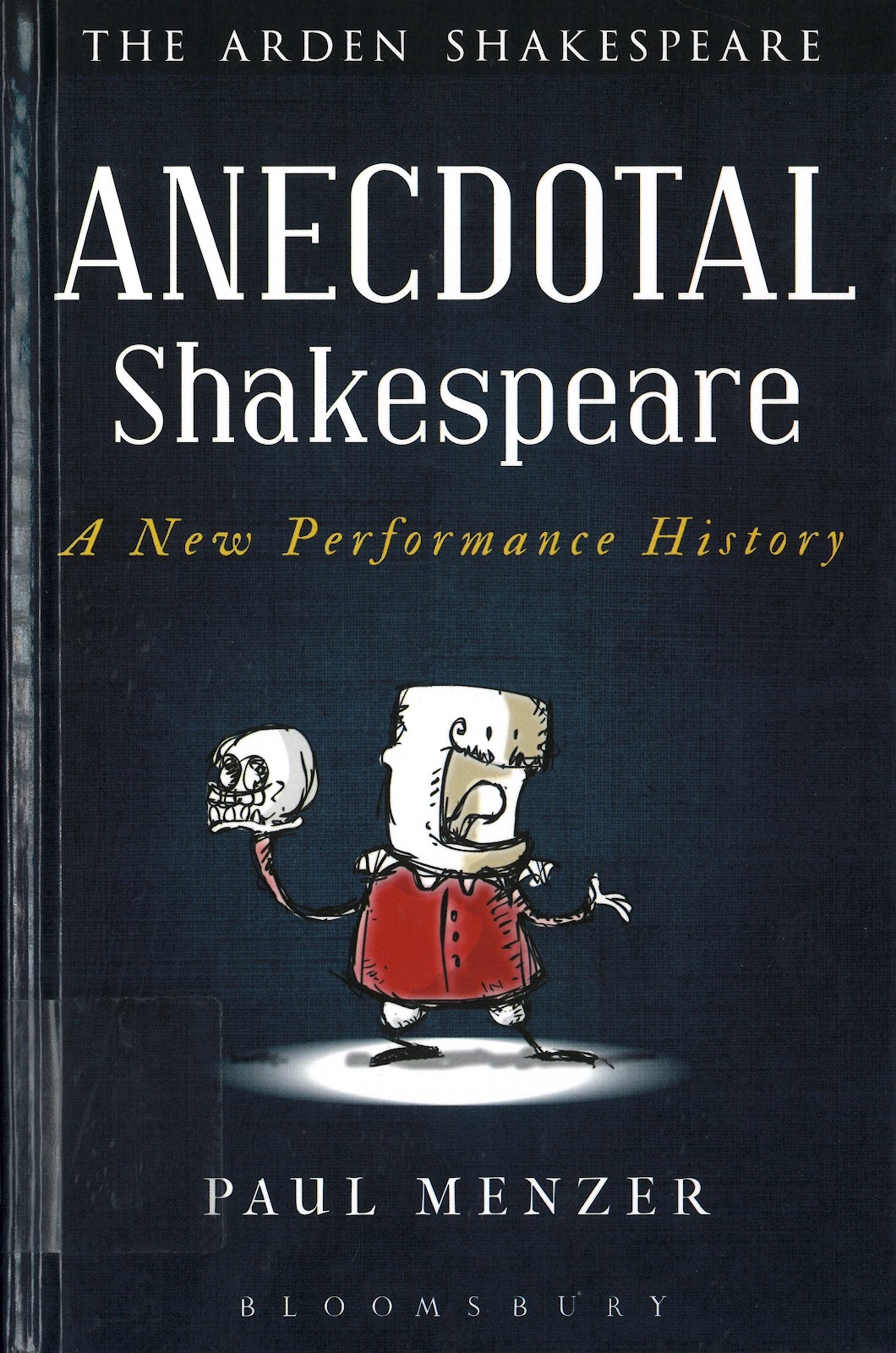 Manzer, Paul Anecdotal Shakespeare: A New Performance History. London: Bloomsbury Arden ws, 2015.I've had my eye on this book for some time, but it was on the dear side for someone with Quarto tastes and a Dover Thrift Edition budget. But I finally convinced a library to buy it.
And I don't regret that, though I am a bit disappointed. I really wanted more anecdotes and less analysis. And I really wanted to track down an anecdote about the blinding scene in a production of King Lear that used (unsuccessfully) a sheep's eyeball as a prop—vile jelly indeed!
But that's what we have: an interesting collection of theatrical anecdotes dating back through the ages to Shakespeare's day and some serious scholarly commentary on them. All the anecdotes relate to just five plays—Hamlet, Othello, Romeo and Juliet, Richard III, and Macbeth.
For some of them, I appreciate the commentary as much as the anecdote. For example, here's an old saw that's been told and retold many times before—the "which actor is the more drunk" trope: 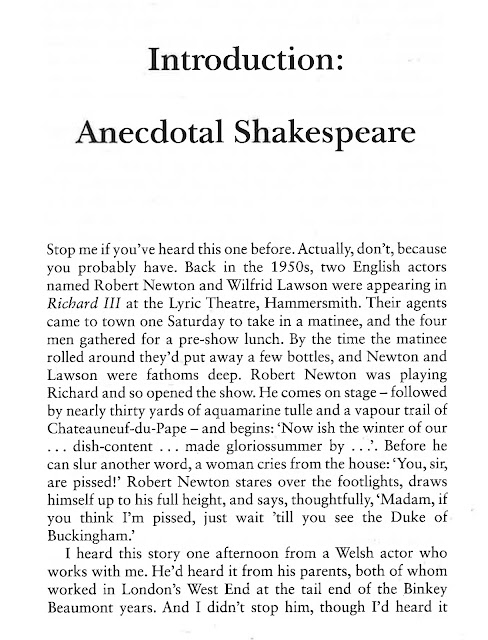 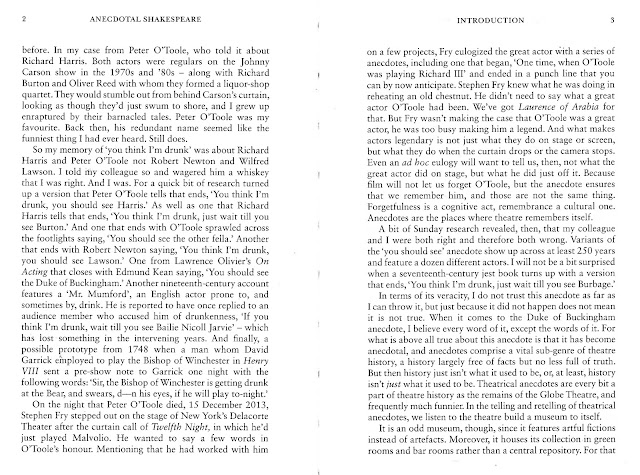 In the Hamlet chapter, we have a delightful anecdote or two about Guildenstern's off-script response to Hamlet's demands that he play on the pipe: 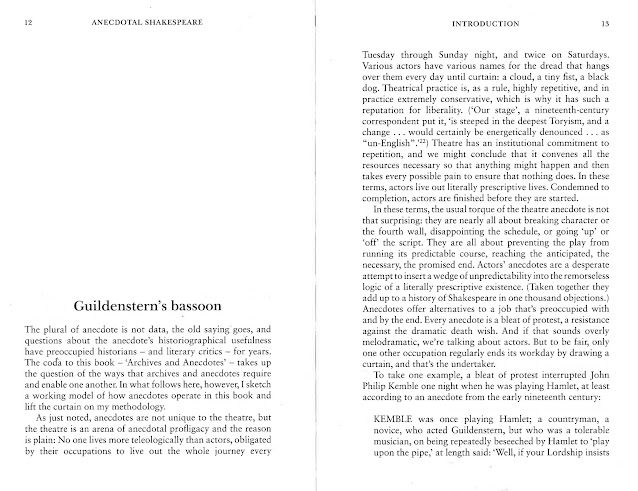 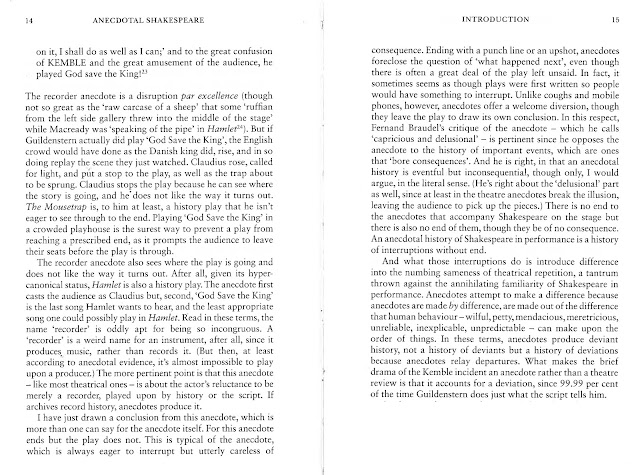 Oh, I would have loved to have been there for that first one. It seems like a show could recover from that and move on successfully—the other one, not so much.
Finally, we have an anecdote told by Peter Bowles which is too good not to be true (though it seems not to be true): 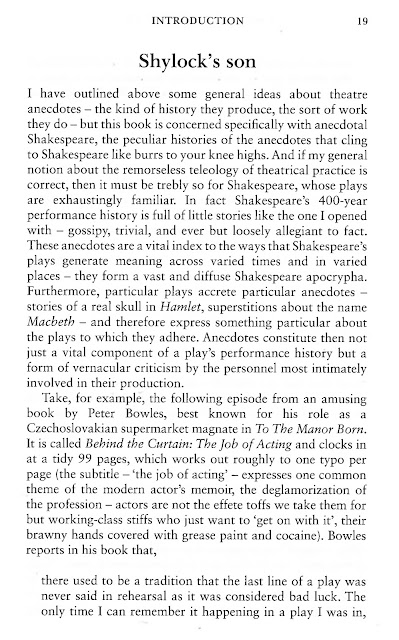 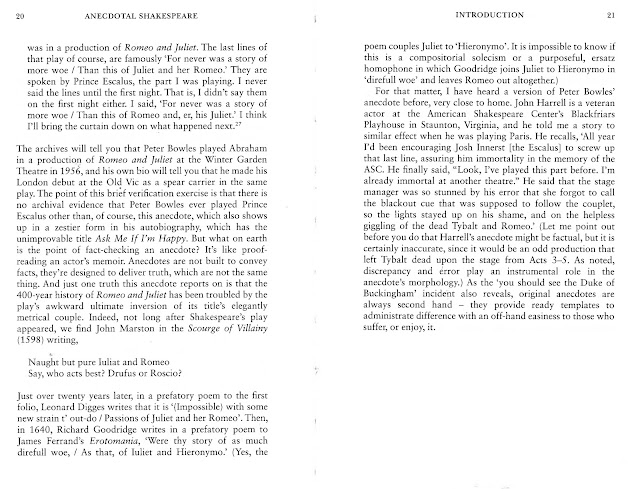 The book is worth reading, but, again, I'd like to have a full collection of theatrical anecdotes—and ones from many more plays than are represented here.
Click below to purchase the book from amazon.com
(and to support Bardfilm as you do so).

I find it curious that in the last excerpt, the author questions why dead Tybalt might be present at the play's conclusion. While certainly there are no requirements he be there, he is Juliet's recently deceased relative, and this is presumably the family crypt/tomb/whatever. So it's hardly outside the realm of possibility (though I admit I haven't seen/read R&J in some years - maybe I'm forgetting something).

I think you're right. Manzer is imagining that Tybalt has been lying on stage since his death. But, yes, a production could choose to bring the actor playing Tybalt back to lie dead in the tomb scene.