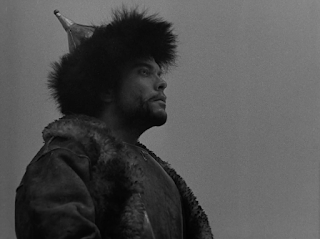 Macbeth. Dir. Orson Welles. Perf. Orson Welles, Jeanette Nolan, Dan O’Herlihy, Roddy McDowall, Edgar Barner, and Alan Napier. 1950. Blu-ray. Olive Films, 2016.
The 1950 version of Orson Welles' Macbeth different from his 1948 version in a number of ways, but one of the main ways is in the accents.  The 1950 version overdubbed with accents that sounded significantly less Scottish than those in the 1949 version. Thanks to the recent release of the Olive Signature Blu-ray of the film, we can compare those accents.

I have taken the "Was the hope drunk" sequence and provided it in the three film clips below. The first provides the 1948 Scottish-accent versions. The second is the less-Scottish 1950 version. And the third provides the first section of the exchange with side-by-side speeches. In each case, the 1948 version will come first.

I find that fascinating. And I suppose the 1950 version is more commercially viable—or was in 1950. But it does lose something in the translation . . . or re-accentization.
Links: The Film at IMDB.

That was really interesting, thank you! I had no idea there were two different versions of it! I much prefer the 1950 less Scottishy version!

You're welcome, One Man Shakespeare. I only knew the more Scottish (Scottisher?) version as well—ever since I bought the only DVD available at the time, which was a Korean import. But the studio hoped that your reaction (less Scottishy, please) would be the reaction of most of the audience.