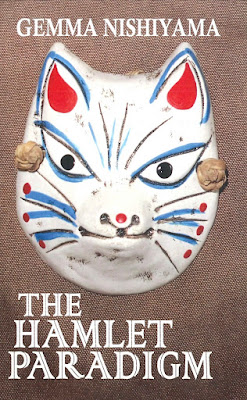 The novel is insipid, tedious, and incomprehensible by turns. It starts with a Japanese homemaker's account of reading Greek myths to her daughter, including those about women being carried off by gods. Then she herself is carried off by an entity named Orsino. He takes her to a space not unlike the Globe Theatre and has his way with her (though she is not reluctant). She explains that when she's with Orsino, it's like he is her husband; when she's with her husband, it's like he is her husband.

Speaking of her husband, he calls from the city where he's working to tell her that she's in danger and needs to go on the run. He won't explain why.

Nor will our author.  For chapter after chapter, they're simply running away while the husband keeps telling her that he'll explain soon.

It turns out that the project he's been working on—Project Elsinore—isn't just a search for our sun's twin star . . . you know, the one Shakespeare knew about when he wrote Romeo and Juliet and Hamlet. It's also research for a company that will send hundreds and thousands of solar-energy-collecting satellites into orbit over the Pacific Ocean, blocking out all the light it would normally receive and, in essence, killing everything in it.

Here are a few sample pages about that (for fun, see just how many typos you can spot): 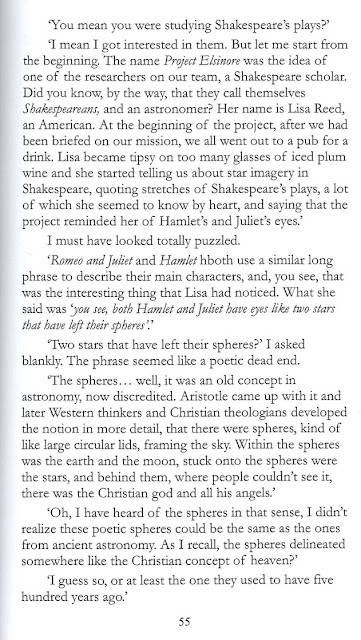 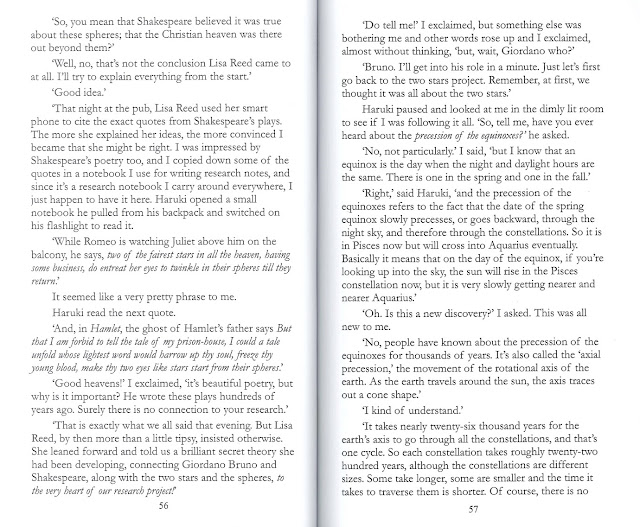 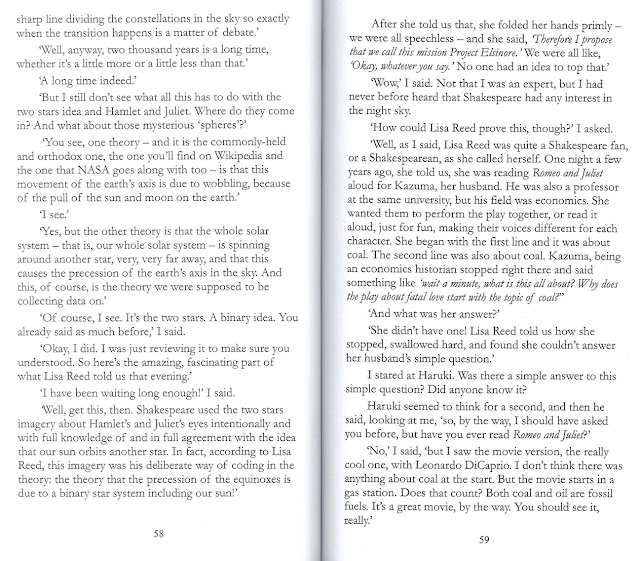 I'm sorry.  I know that was painful for many of you.

For the rest of the novel, they're on the run, trying to get the information to one journalist or another so that the project can be stopped.

I don't imagine any of you will actually care to read this novel, but, just in case . . .

Spoiler alert!  If you wish to read this novel yourself one day, skip the following.

And, in essence, they fail. No one cares about the project, and there's too much big-business and politics surround the project to stop it. Orsino pops in every now and then to help our protagonist and to utter incomprehensible ideas about different planes of existence. We learn that Hamlet is pro-sun and Claudius is pro-coal (where on earth that comes from I just can't fathom—a misreading of the first few lines of Romeo and Juliet, I suspect), and the research project's name is changed from Project Elsinore to the Hamlet Paradigm.

But don't worry—the project stops. The true hero of the novel is . . . the economy. It's too costly of a project, so investors start backing out, and the whole project just peters out—and so does the novel.

It turns out the author has a first book out:  Juliet is the Sun. In it, "Shakespeare's ghost visits a middle-aged expat academic in Japan to impart his wisdom and make her laugh." It's only available on Kindle, but, even if it weren't, I don't think I'd read it.

Click below to purchase the book
(not that I recommend doing so)
from amazon.com
(and to support Bardfilm as you do so).